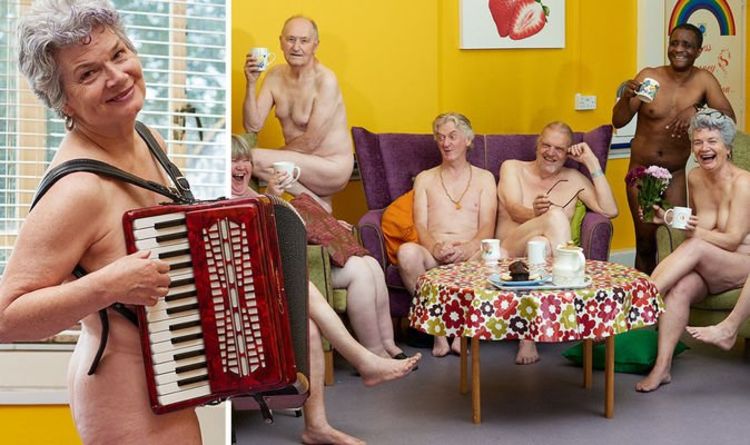 
A group of pensioners have stripped off to pose naked for a charity calendar.

Staff and volunteers at the Elders Voice organisation posed nude to break the stigma attached to growing old and raise money in the process.

Elders Voice works with and for older people in the London Borough of Brent, enabling them to stay safe, secure and independent in the home of their choice while offering a variety of social and leisure opportunities.

Richard Downes decided to get involved in the production of the calendar after his wife, Jean Bayliss, who also features in the calendar, persuaded him to take part.

In the pictures, the husband and wife duo can be seen waltzing around a dayroom in the nude as a naked man plays the piano in the background.

Richard said: “I only really did it because my wife asked me to.

“She persuaded me it would be fun, and it would probably be the only time I ever did it. It helped that we have both had a long-term relationship with Elders Voice and feel supportive of the organisation.

Other pictures show topless Wellbeing Manager Lynn Burling protecting her modesty behind a tea pot and pinny in the cafe.

Clair Chapwell, Founder of Bolder Voices, plays the accordion in the buff, while a musical ensemble concealing their modesty with just a tambourine, guitars and a piano in other snaps.

London based dancer and pantomime director Christopher Dunham also features in the photoshoot as does Walton Mclaren, an upcoming stand-up comedian.

These Mysterious Fungi Belong to an Entirely New Branch on The Tree of Life : ScienceAlert
It Sounds Crazy, But Walking Backwards Is Really, Really Good For You : ScienceAlert
Engineers Propose an Ambitious Plan to Bury Excess Carbon at The Bottom of The Ocean : ScienceAlert
A Strange Thing Happens to Wolves Infected by Infamous Mind-Altering Parasite : ScienceAlert
An AI Found an Unknown ‘Ghost’ Ancestor in The Human Genome : ScienceAlert