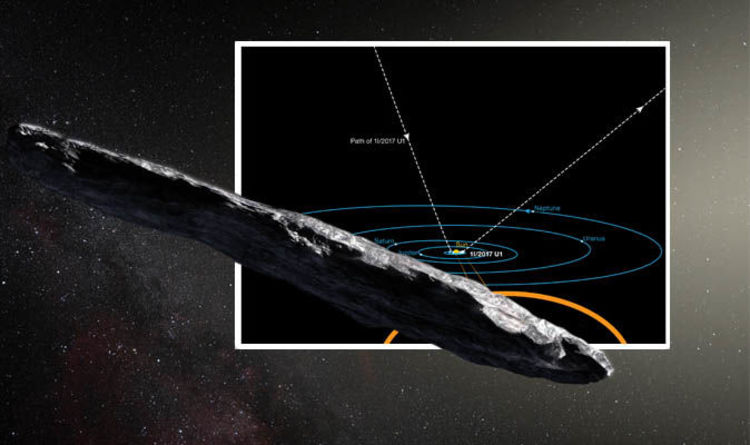 After travelling though deep space for millions of millions of years, Oumuamua was the first object from beyond the solar system to enter our solar space.

Oumuamua’s arrival triggered fears it was an alien ship or probe scanning for signs of intelligent life. In fact, Oumuamua means ‘scout’ in Hawaiian.

But astronomers soon discovered the foreign object was natural in origin, and believed to have originated from the star Vega. Until now.

The latest analysis of the asteroid’s trajectory determined, Oumuamua would have been nowhere near Vega – 25 light years away from earth – some 300,000 years ago.

Instead the new research has suggested Oumuamua may be a lot more alien in origin than initially assumed.

The study at the University of Toronto at Scarborough, Canada, concluded the needle asteroid may originate from a binary star system – a system with two stars in orbit around each other.

“It’s really odd that the first object we would see from outside our system would be an asteroid, because a comet would be a lot easier to spot and the Solar System ejects many more comets than asteroids.”

Oumuamua most likely entered our space from a binary system due to the gravitational ‘tug-of-war’ between the two gas giants.

The Oumuamua research paper published in the journal Monthly Notices of the Royal Astronomical Society, said: “While giant planets are relatively uncommon, tight binary systems are abundant, and are extremely efficient at ejecting material.

“They may therefore represent a dominant source of interstellar small bodies.”

The asteroid was likely ejected from its binary system during the stars’ planetary formation period.

Oumuamua has since made its closet approach to Earth on October 14 last year, coming as close as 15 million miles away from the planet.

The mysterious object is now speeding towards the outer edge of our solar system and is already too small and faint to be seen by NASA’s telescopes.

In December a team of astronomers at the at the Breakthrough Listen Initiative blasted the object with radio waves in search of potential signs of alien life.

Andrew Siemion, Director of Berkeley SETI Research Center, said at the time: “It is great to see data pouring in from observations of this novel and interesting source.

“Our team is excited to see what additional observations and analyses will reveal”.

Unfortunately after collecting more than 90 TB of raw data, the scientists concluded Oumuamua was nothing more than a chunk of dead space rock.