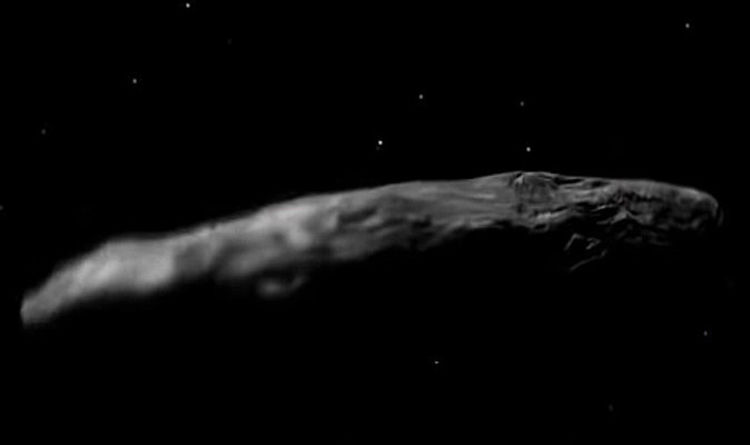 Prof Avi Loeb, chief of the Department of Astronomy at the US institution, admitted Oumuamua is “nothing like we’ve seen before”.

Speaking to the Today programme on Friday, Prof Loeb said: “It’s the very first interstellar object that we discovered in the solar system passing near the Earth.

“It’s like having a guest for dinner and realising that out of the other guests you have this one is from a foreign country. You can learn about the culture in that country without paying the airline ticket to get there.”

The unusual cigar-shaped object first emerged on Earth’s radars in October last year when it came across NASA’s Pan-STARRS1 telescope in Hawaii.

After travelling through deep space for millions of millions of years, Oumuamua was the first object from beyond the solar system to enter our solar space.

Prof Loeb continued: “What’s peculiar is that this particular object looks like nothing we’ve seen before. It seems really weird. It has a strange shape, unlike any of the asteroids, the comets we have seen in the solar system.

“We don’t have an image of it, what we see is reflected sunlight. As this object spins it reflects different amounts of sunlight so we can tell its brightness varies as it spins. It varies by a factor of 10, much more than any asteroids, which implies it’s much longer than it is wide by at least a factor of 5 to 10.”

Oumuamua most likely entered our space from a binary system due to the gravitational ‘tug-of-war’ between the two gas giants.

The Harvard academic also said researchers remained puzzled about the driving force dictating the trajectory of Oumuamua: “Most intriguingly it’s moving on a trajectory that implies an extra push.

“In addition to the gravitational force from the sun, there seems to be another force acting on it. The question is what is it.”

But Prof Loeb and colleague Shmuel Bialy admitted that even if their theory turned out to be true, then there was still the possibility that it was just a “defunct sail floating under the influence of gravity and stellar radiation”.

Prof Loeb wrote: “The alternative is to imagine that Oumuamua was on a reconnaissance mission.

“The reason I contemplate the reconnaissance possibility is that the assumption that Oumuamua followed a random orbit requires the production of ~10^{15} such objects per star in our galaxy.

“This abundance is up to a hundred million times more than expected from the solar system, based on a calculation that we did back in 2009.

“A surprisingly high overabundance, unless Oumuamua is a targeted probe on a reconnaissance mission and not a member of a random population of objects.”

Oumuamua is no longer in this solar system and is now too far away for scientists to properly analyse.