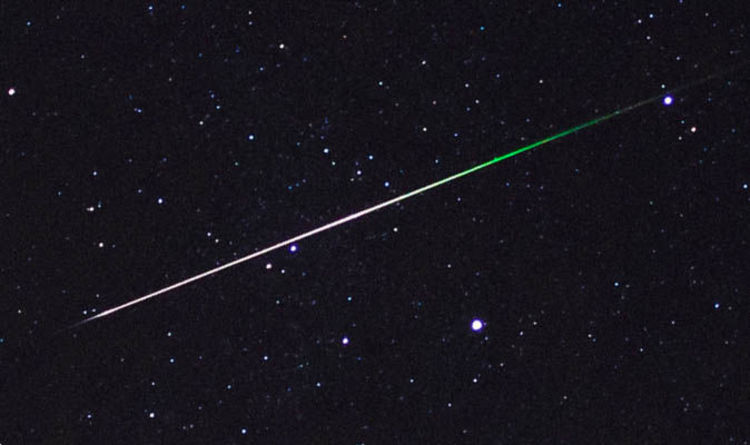 
The annual meteor shower starts to produce shooting stars at night between the start of October and the first week of November.

This year, astronomers expect the first Orionid meteors to become visible around mid-October, as the shower heads towards its peak.

The peak is the spectacular moment when the meteor is at its most beautiful and intense.

Dr Edward Bloomer, an astronomer at the Royal Observatory Greenwich, told Express.co.uk the shower is expected to peak this month on the nights of October 21 and October 22.

The astronomer said: “The Orionids meteor shower, appearing to radiate from near Orion’s right elbow and caused by material from Halley’s comet, reaches peak activity on the 21st and 22nd of the month.

“However, there is activity between the 20th and 27th, giving us more opportunity to have a go at spotting the shower.”

The good news is the shower will be fully visible from the UK but conditions might not be ideal.

The presence of the Waxing Moon will throw a spanner into the works of anyone hoping to see the shower in person.

The October Full Moon reaches zenith this month on the night of October 24, which might worsen viewing conditions.

In the run-up to the Full Moon, just as the Orionids peak, the skies might look bright and washed out at night.

Dr Bloomer said: “Though reliable, the Orionids are not particularly active.

“With Orion low on the horizon, an observer may only spot a few meteors per hour.”

For the best chance to spot the Orionids peak, the astronomer shared some crucial tips that might help.

He said: “Wrap up warm. You may have to spend a fair bit of time outside before you see anything.

“Get as far away from any light source as you reasonably can.

“The light pollution of urban areas makes it difficult to spot anything in the sky and you want your eyes to be as sensitive as possible.

“Relax and observe. The steaks of light you’re searching for are very often too-short-lived to show anyone else, or snap a picture of.

‘Witnessing them can be a pretty personal experience but certainly no less valuable for it.”

What are the Orionid meteors?

The Orionids are an annual meteor shower produced by the cosmic debris left in the orbital path of periodic Comet Halley.

Each year the Earth passes through this dusty highway and the debris slams into the planet’s atmosphere at great speeds, producing dazzling streaks of light across the sky.

The Orionids are named after the constellation Orion – their apparent point of origin when viewed from Earth.