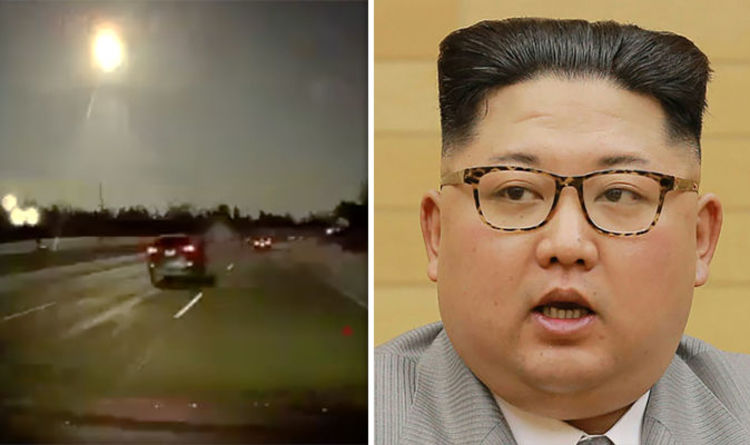 
Video footage of the unusual event shows the night sky suddenly light up as if it was daytime before quickly turning dark again.

The incident happened just after 8pm on Tuesday night and was largely witness in the state of Michigan.

The US National Weather Service (NWS) have confirmed they suspect a meteor to be likely behind the extraordinary scene.

On Twitter, they said: “After reviewing several observational datasets, the NWS can confirm the flash and boom was NOT thunder or lightning, but instead a likely meteor.

“We continue to monitor feeds from astronomical agencies for official confirmation of a meteor.”

Thousands of confused residents took to Twitter to seek an explanation for the odd sight that lit up the sky.

One user called Maiya said: “Everyone in my area is talking about the big boom that shook some of their houses.”

Meanwhile, another user asked: “Did anyone else feel that meteor or was it something else?”

Other social media users admitted they feared the loud bang might have been a nuclear bomb sent from North Korea.

Someone said: “It’s sad to think that I was convinced that the meteor was a bomb from North Korea and started panicking while driving.”

Another person joked that it was lucky the suspected meteor didn’t fly across the sky over the weekend when a nuclear bomb alert was accidentally released.

They said: “So a loud meteor just hit metro Detroit.

“Would’ve been a terrible time to receive that fake ballistic missile threat alert.”

On Saturday people across Hawaii scrambled for safety when a warning message about an inbound missile was sent to mobile phones and shown on television.

For 38 minutes the threat was presumed to be genuine, with the message warning: “This is not a drill.”

However, the alert was finally revealed to be false and the result of someone at the state’s emergency centre “pushing the wrong button”

Thinking Hard and Long Can Cause Brain Drain : ScienceAlert
This Artificial Synapse Can Run a Million Times Faster Than Ones in The Human Brain : ScienceAlert
A Nuclear War Could Starve Billions, But One Country May Be Safer Than The Rest : ScienceAlert
Many Cat Lovers Are Giving Their Cats Unwanted Affection, Study Suggests : ScienceAlert
Scientists Have Found A New Way to Detect Alien Worlds Beyond Our Solar System : ScienceAlert