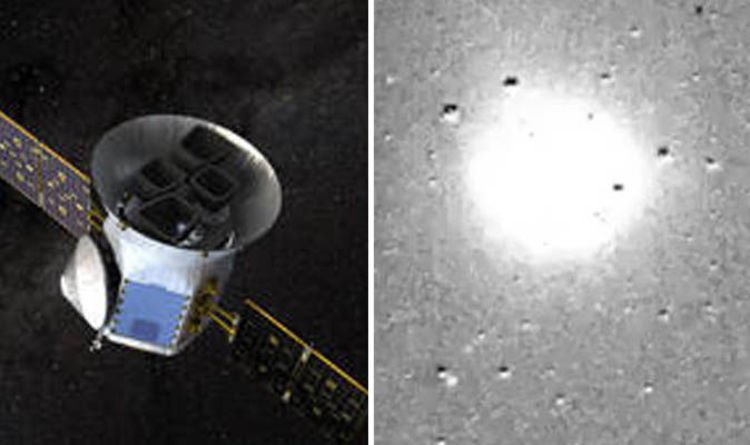 
The Transiting Exoplanet Survey Satellite (TESS) was launched on July 25 with the mission to find planets outside our solar system that could harbour life.

The first images have now been sent back, showing a comet called C/2018 N1 in the southern constellation Pisces Austrinus.

The comet can be seen moving across the frame from right to left as it orbits the Sun.

Eagle-eyed viewers will be able to see the comet’s tail move from the Sun in an event called solar wind as it gradually pivots and changes direction.

The images also reveal how the stars appear to shift between black and white, which highlights stars changing in brightness.

Asteroids are also seen as the small white dots moving throughout space.

In final seconds of the video caught by the planet hunter a faint arc of light can be seen moving across the middle section of the frame form the left to the right.

Scientists at Massachusetts Institute of Technology/NASA’s Goddard Space Flight Center say this is a stray light from Mars, which is not in the frame itself.

These images were taken before the TESS left our solar system to search for planets that could potentially support life.

Paul Hertz, NASA Astrophysics division director, said at the launch that he looks forward to TESS’ discoveries of the new worlds that are out there.

He said: “Now that we know there are more planets than stars in our universe, I look forward to the strange, fantastic worlds we’re bound to discover.”

TESS will send new images back every 13.5 days as it will spend the next two years finding thousands of planets.

The satellite is capable of doing this by monitoring the nearest and brightest stars for periodic dips, which are known as transits, in their light.

The dips suggest that a planet may be passing in front of a star.

It is billed by NASA as the “first ever space borne transit survey that will observe the whole sky”.

Planets outside of our solar system are known as exoplanets and scientists are keen to learn more about them.

Previous mission Kepler informed the space agency of the existence of exoplanets with TESS now ready to find out more.

NASA expert Dr Martin Still said: “We expect to find a whole range of planet sizes between planets the size of Mercury or even the moon, our moon, to planets the same size as Jupiter and everything in between.

“The most interesting thing about these TESS discoveries is gonna be how close they are and the fact that their host stars are gonna be bright relative to those Kepler stars.

“And so, this means that these stars and planets are gonna be much easier to follow up, both with ground based telescopes and with future space telescopes like James Webb [Space Telescope] where we’ll be able to characterise the properties of those planets and their host stars far more readily than we can with the planet population that we already know.”