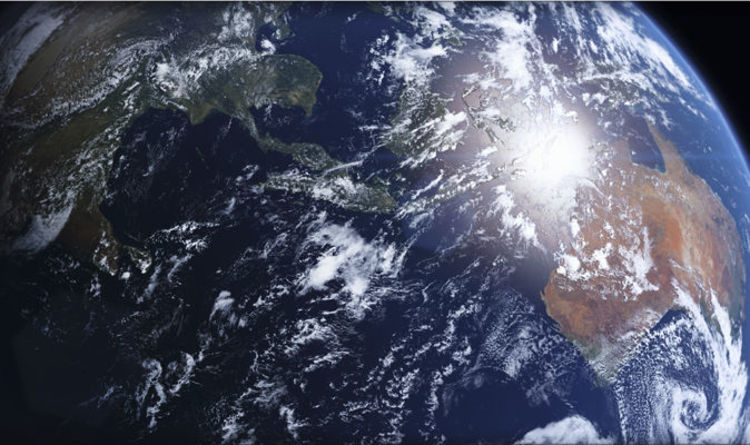 
The fascinating video, based on data from NASA’s Worldview Data, illustrates the effects of climate change and extreme weather patterns from 2000 through to current day.

The extraordinary footage was captured by NASA’s Moderate Resolution Imaging Spectroradiometer (MODIS) instrument aboard NASA’s Terra and Aqua satellites, which launched in 1999 and 2002.

Some of the footage shows ice breaking away from the Arctic which will lead to climate change, the onslaught of Hurricane Katrina in 2005 and the subsequent flooding and a huge waft of smoke drifting towards mainland Europe from Iceland when the Eyjafjallajökull volcano erupted causing travel chaos for the continent.

He said: “In the ’80s and ’90s, if you wanted to look at, say, clouds off the coast of California, you had to figure out the time of year when it was best to look at these clouds, then place a data request for a specific window of days when you thought the satellite overflew the area.

“You would get a physical tape with these images and have to put this into the processing system. Only then would you know if the image was usable.

“This process used to take from days to weeks.”

However, thanks to the imagery from Worldview, this can be achieved almost instantly.

Mr Gassó said: “Now, you can look at images for days, weeks and even years in a matter of minutes in Worldview, immediately find the images you need and download them for use.

A Strange Thing Happens to Wolves Infected by Infamous Mind-Altering Parasite : ScienceAlert
Mars Once Had So Much Water, It Could Have Been An Ocean World, Scientists Say : ScienceAlert
Chilling Glimpse Into Our Future if We Survive Another Million Years : ScienceAlert
These Mysterious Fungi Belong to an Entirely New Branch on The Tree of Life : ScienceAlert
A Tobacco Plant Has Been Engineered to Produce Cocaine in Its Leaves : ScienceAlert