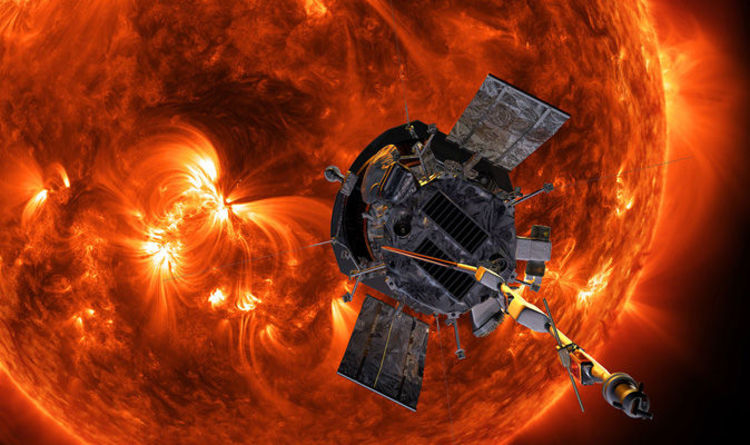 
The satellite began its passing of the Sun yesterday, and by November 5, it will be at its closest point.

The Parker Solar Probe will be just 15 million miles from the surface of the sun at that point.

While that distance may seem massive, Earth is 93 million miles from the Sun and the Parker Solar Probe will be battling temperatures of around 1,000 degrees Celsius – hotter than a working blast furnace which run at 900 degrees Celsius.

However, this mission is just one of 24 manoeuvres towards the Sun, and at its closest point, the probe will be just four million miles from the sun where temperatures exceed 1,400 degrees Celsius, which is hot enough to turn steel to liquid.

But scientists will have to wait weeks to receive the data from the Parker Solar Probe as the Sun emits so many radio waves that they simply block out signals from the satellite.

NASA spent 15 years of painstaking trial and error to develop a material which is both lightweight and super heat resistant.

The final result sees the front and back of the heat shield made of carbon-carbon – a material designed for scorching temperatures.

The two carbon-carbon sheets are just a tenth of an inch thick, meaning they are quite malleable.

Between the heat shields are 4.5 inches of carbon foam which is 97 percent air.

This allows for the shields, place on the back and front of the Parker Solar Probe, to be light while also meaning that there is not much material for heat to travel through allowing it to cool of quickly.

Then a layer of white coating was added to the heat shield as to reflect some of the heat and light.

The mission will gather data about the sun’s outermost atmosphere known as the corona.

Temperatures in the corona are up to 500,000 degrees celsius and, for an unknown reason, far exceeds the heat of the sun’s core.

It will also help scientists understand the history of the sun and solar winds.

NASA said in a statement: “Parker Solar Probe, protected by a first-of-its-kind heat shield and other innovative technologies, will provide unprecedented information about our Sun, where changing conditions can spread out into the solar system to affect Earth and other worlds.”

Alzheimer’s Gene Doesn’t Guarantee Dementia. Here’s What You Can Do to Reduce Risk : ScienceAlert
Two Black Holes Met by Chance, And It Created Something Never Seen Before : ScienceAlert
Scientists Glimpse Incoming Asteroid Just Hours Before It Makes Impact : ScienceAlert
Volcanoes May Have Transformed Venus Into a Blistering Hellscape : ScienceAlert
Ancient ‘Weird Wonders’ Could Be Leftovers From The Cambrian Explosion : ScienceAlert