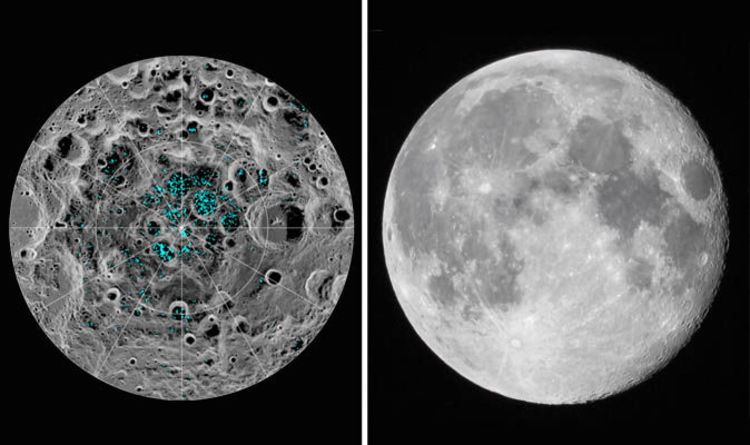 
The NASA announcement is the first direct evidence of frozen water pooled on the surface of the lunar orb.

Previous lunar reconnaissance missions touted the possibility of water existing below the rugged surface of the Moon.

Scientists are now certain frozen pools of icy water exist in the most sun-starved craters on the Moon’s polar regions.

NASA said in a statement: “At the southern pole, most of the ice is concentrated at lunar craters, while the northern pole’s ice is more widely, but sparsely spread.”

The incredible finding was made by a team of researchers led by Shuai Li of the University of Hawaii and Brown University.

The discovery was published in the Proceedings of the National Academy of Sciences with the aid of Richard Elphic from NASA’s Ames Research Center, California.

In the published paper, the scientists wrote: “We found direct and indirect evidence for surface-exposed water ice in the lunar pole regions.

“The abundance and distribution of ice on the Moon are distinct from those on other airless bodies in the inner solar system such as Mercury and Ceres, which may be associated with the unique formation and evolution process of our Moon.

“These ice deposits might be utilised as an in situ resource in future exploration of the Moon.

The M3 tool identified three distinct signatures around the Moon’s pole, confirming the presence of ice.

You can see these icy deposits in the image above – the blue colour around the Moon’s poles represent the discovered ice caps.

NASA’s M3 was blasted off to the Moon onboard the Indian Space Research Organisation Chandrayaan-1 spacecraft in 2008.

The machine collected and analysed data based on the reflective properties of ice but also examined the way ice molecule absorb infrared light.

This allowed NASA to differentiate between the different forms of liquid water, vapour and ice around the poles.

NASA said: “Most of the newfound water ice lies in the shadows of craters near the poles, where the warmest temperatures never reach above -250 degrees Fahrenheit.

“Because of the very small tilt of the Moon’s rotation axis, sunlight never reaches these regions.”

Previous observations of the Moon only four indirect signs of surface water around the Moon’s south pole but these were never full confirmed.

NASA’s scientists claimed the results could have been easily fooled by the reflective surfaces of the Moon’s soil.

The USA-based space agency is now positive the presence of water – even in minuscule amounts – could be a promising start for fauna lunar colony missions.

NASA said even a few millimetres of water could be the first step towards future resource gathering missions and more permeant lunar bases.

Surface waters could also lead NASA to further discoveries of water below the launder surface.

At the time, NASA’s chief lunar scientist Michael Wargo, said the space agency is unlocking the deepest mysteries of the Moon.