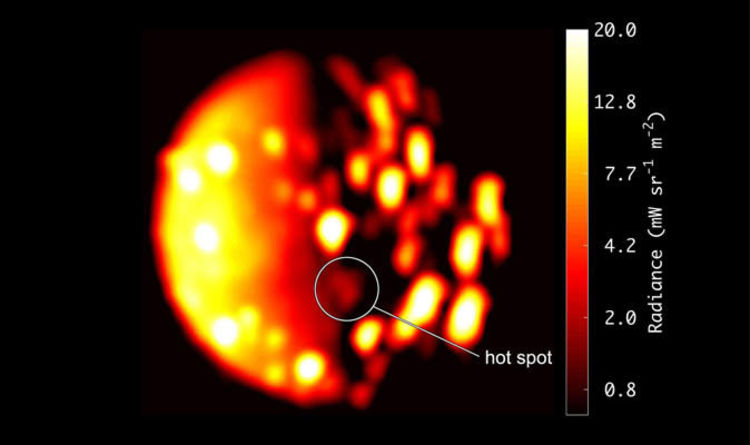 
The Juno space probe picked up the source of intense heat near the moon’s south pole during a flyby on December 16, 2017.

NASA’s scientists at the Juno mission are confident the hotspot is proof of a new volcano on Io.

The first signs of volcanic activity on Io were discovered by the Voyager 1 probe in 1979.

Further flybys by a number of future space probes from the Voyagers to New Horizons have established the presence hundreds of volcanoes.

Ground-based observations have detected at least 150 active volcanoes and scientists estimate another 250 could be waiting to be discovered.

Alessandro Mura, a Juno co-investigator from the National Institute for Astrophysics in Rome, said there is a slim possibility of the hotspot being a previously discovered volcano but it is unlikely.

He said: “The new Io hotspot Jovian InfraRed Auroral Mapper (JIRAM) picked up is about 200 miles from the nearest previously mapped hotspot.

“We are not ruling out movement or modification of a previously discovered hot spot, but it is difficult to imagine one could travel such a distance and still be considered the same feature.”

Detailed JIRAM photos map out the exact location of the Jovian volcano.

The infrared picture above shows the various sources of volcanic heat around the moon.

Higher temperatures are characterised by the brighter blobs of light.

The scale to the right of Io shows the range of temperatures picked up by Juno’s infrared equipment.

NASA said in a statement the Juno team will now continue to analyse the data sets collected last year for more information.

More infrared imagery will be collected by the JIRAM imager on closer flybys of the moon in the future.

NASA’s Juno spacecraft launched towards Jupiter on August 5, 2011, and has so far logged 146 million miles of travel since entering Jupiter’s orbit.

On July 16 this year, Juno will make its 13th pass of the planet to collect data.

Watch a Tiny Robot Blob Transform Into Even Tinier Bits to Squeeze Through Cracks : ScienceAlert
We Have Our First Look at Neptune’s Rings in 33 Years, And They’re Glorious : ScienceAlert
A Weird Blob of Hot Gas Is Whizzing Around Sagittarius A* With ‘Mind-Blowing Velocity’ : ScienceAlert
Wolves Really Can Become Attached to Humans Like Dogs Can, Adorable Study Finds : ScienceAlert
A New FRB Signal Has Buzzed Nearly 2,000 Times in Just Two Months, Raising a Mystery : ScienceAlert