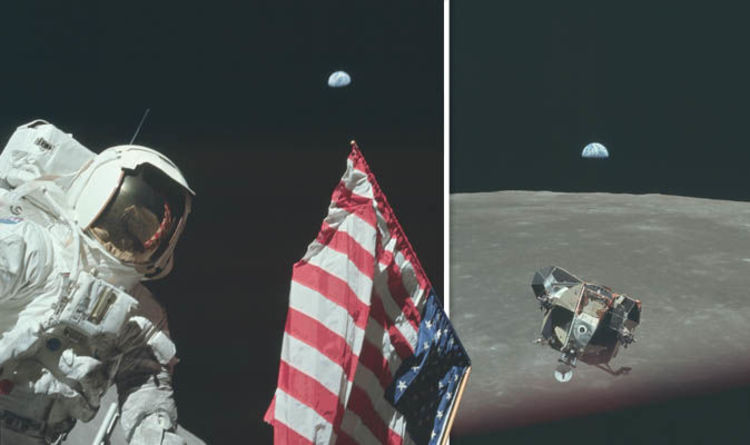 Mr Bridenstine said he expects “lots of humans in space” to build the stepping stones necessary towards reaching the stars.

He said: “When you look back at history, look back at the end of the Apollo program, 1972 when we didn’t go back to the Moon you look back and there was a period of time there after Apollo and before the space shuttles when we had a gap of human spaceflight capability.

“And then you go forward and look at the retirement capability of the space shuttles in 2011, and now we’re getting to the point where we’re ready to fly commercial crew.

“We’ve got a gap of about 80 years in our ability to fly crew in space.”

The NASA chief said he does not want another gap like that to occur once the International Space Station is retired.

He said it is important to “prevent another gap” and that is why it is time to talk about putting people into space.

Mr Bridenstine NASA missed the mark to settle on the Moon almost a decade ago when scientists discovered the presence of icy water on the Moon in 2009.

The discovery could have been the trigger for a renewed interest in returning to the Moon en-masse for further exploration he argued.

Mr Bridenstine said: “From 1969, when we first landed on the Moon, up until 2009, a lot of people believed that the moon was bone-dry.

“So the question is, during those 40 years we missed that, what else have we missed?”

On Thursday, August 23, US Vice President Mike Pence boldly announced the current administration’s plan to revitalise US dominance in space.

Mr Pence told a room full of NASA employees to set their eyes once more on the Moon and to be ready for what lies beyond it.

Speaking in Houston, he said: “The time has come, we really believe, for the United States of America to take what we have learned over these so many decades, put NASA’s ingenuity and creativity to work and establish a permanent presence around and on the Moon.”

In order to achieve this dream of lunar dominance, the Vice President outlined a plan for an orbital platform near the Moon.

Dubbed the “Lunar Gateway” Mr Pence touted the electoral propulsion system worth £389million ($500million) was ready to go from proposal to production.

He said: “We’re only a few short years away from launching the Gateway’s first building blocks into space, turning science fiction into science fact.

“And our administration’s working tirelessly to put an American crew aboard the Lunar Orbital Platform before the end of 2024.”

Mr Bridenstine in turn argued the Lunar Gateway will open new avenues for the exploration other worlds such as Mars.

He said: “What we don’t want to do is go to the surface of the Moon, prove that we can do it, and then be done.”

Ancient Burial of a Young Girl Shows How We Carried Our Babies 10,000 Years Ago : ScienceAlert
A Rare Condition Makes Hair Truly Untamable, All Thanks to These Genes : ScienceAlert
‘Dark Data’ Is Leaving a Huge Carbon Footprint, And We Have to Do Something About It : ScienceAlert
Long COVID Is Still Raising More Questions Than Answers, Say Researchers : ScienceAlert
New Discovery Means Parkinson’s Could Be Diagnosed With a Swab in Just 3 Minutes : ScienceAlert