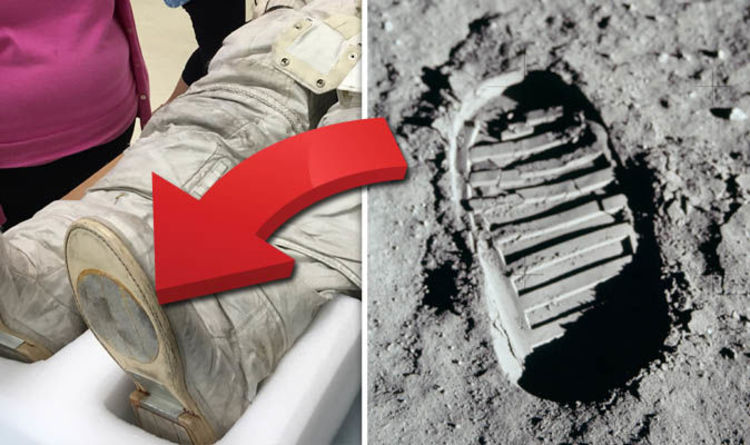 
Conspiracy theorists have challenged NASA’s 1969 Moon landing story after claiming Neil Armstrong’s iconic footprint does not match the sole of his lunar boots.

On July 20, 1969, Mr Armstrong took one small step for man and firmly planted his feet in the grey, dusty surface of the Moon.

An iconic photograph of the very first steps on the Moon was forever captured by fellow astronaut Buzz Aldrin and the footprints will remain on the windless Moon for millions of years.

Conspiracists have now claimed a photograph of Neil Armstrong’s spacesuit taken in 2016, is the final piece of evidence needed to disprove NASA’s Moon landing.

Eagle-eyed conspiracists were quick to point out the soles on the spacesuit’s boots are flat an smooth without any grooves.

The footprint left behind on the Moon, however, shows an imprint of a sole with thick perpendicular treads.

YouTube conspiracy channel ParaBreakdown said: “The bottoms of these boots don’t match at all the famous print left on the Moon’s surface.

When the two astronauts explored the surface of the Moon and collected rock samples for transport back to Earth, Mr Aldrin documented his time on the lunar orb on camera.

As he hopped around in the low-gravity environment the astronaut took a number of photographs of his footprints.

The second piece of the puzzle debunking the conspiracy claim is the actual gear both astronauts wore to the Moon.

A breakdown of the astronauts’ spacesuits shows they wore a kind of protective overshoe on top of their boots once they stepped out onto the Moon.

These overshoes are much thicker and bigger and feature pronounced treads like the ones in the footprint photo.

A single photo of Mr Armstrong’s feet on the Moon shows him wearing these exact overboots on top of his spacesuit.

A plaque from the Frontiers of Flight Museum in Texas, featured next to the piece of equipment, reads: “Overshoe, Lunar – Left, Training.

“This overshoe went over the regular boot area on the spacesuit version used on the Moon, called the A7LB Space Suit.

“The shoe provides extra protection from rips, tears, and dust to the basic space suit.

“These overshoes left the distinctive footprints, which are still on the Moon to this day.”

After the success of the Apollo 11 mission, NASA astronauts set foot on the Moon six more times.

Apollo 17 was the final Moon-bound mission, which touched down on the lunar orb in 1972.

Humans Keep Growing an Extra Artery in Their Arms, And This Is Why : ScienceAlert
A Strange Thing Happens to Wolves Infected by Infamous Mind-Altering Parasite : ScienceAlert
Giant Asteroid Unleashed a Devastating Martian Megatsunami, Evidence Suggests : ScienceAlert
Lyme Disease Is on The Rise, But There Might Be Hope in a New Vaccine : ScienceAlert
Millions of ‘Silent Synapses’ Could Be The Key to Lifelong Learning : ScienceAlert