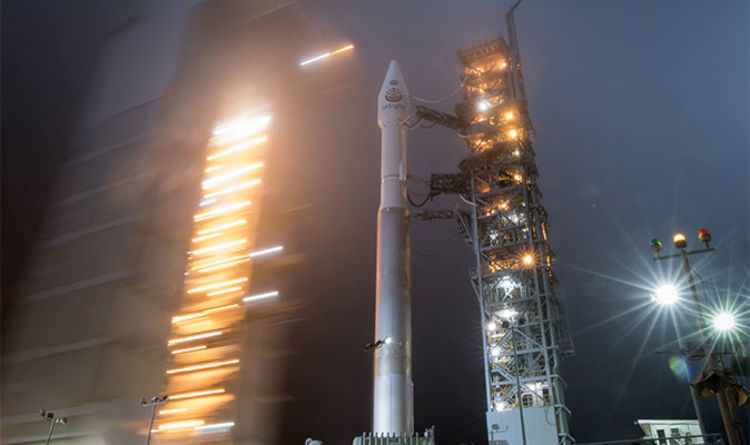 The landmark mission will see the Insight monitor the inner core of Mars, with the aim of figuring out what the planet is made of.

InSight’s launch is set to take place at 7:05am Eastern Time, or 12:05pm in Britain, at a base on the central Californian coast.

The Mars InSight probe will be propelled into space for NASA and its Jet Propulsion Laboratory (JPL) on top of the Atlas V, a clossal 19-story rocket from the fleet of United Launch Alliance, a partnership of Lockheed Martin Corp and Boeing.

There is huge concern among experts that weather could postpone the launch, with just a 20 percent chance according to the latest forecast that the weather will be suitable.

Fog near the launch site, Vandenberg Air Force Base in California, could prompt NASA scientists to call off the landmark launch.

However, the 30th Space Wing, which oversees missions from Vandenberg, claims it may be possible that ULA can launch through the fog, but the rocket itself will be hard to see for the public.

InSight’s launch window starts May 5 through June 8, 2018, with multiple opportunities over windows of approximately two hours each date.

The Insight’s payload will be released about 90 minutes after launch on a 301 million-mile (484 million km) flight to Mars.

The rocket, which will reach Mars by November, will land on a smooth plain close to the planet’s equator called the Elysium Planitia.

According to NASA, the Mars lander is designed to give the Red Planet “its first thorough checkup since it formed 4.5 billion years ago”.

Once settled, the solar-powered InSight will spend two years – approximately one Martian year – plumbing the depths of the planet’s interior for clues to how Mars took form and the origins of the Earth and other rocky planets.

Scientists will try to use the frequent marsquakes over the course of the mission to deduce the depth, density and composition of the planet’s core.

Among the questions that Insight hopes to answer is whether Mars’ core remains molten.

Alongside the Insight, Atlas V will also carry two  mini-spacecrafts called Mars Cube One, or MarCO, which will fly on their own path to Mars behind Insight.

Their goal is to relay nSight data as it enters the Martian atmosphere and lands, which researchers hope can offer new capabilities to future missions

NASA’s live coverage of the launch will begin at 11:30AM BST.

Millions of ‘Silent Synapses’ Could Be The Key to Lifelong Learning : ScienceAlert
Crocodiles Seem to Be Thriving in a Toxic River That’s More Like a Sewer. Here’s Why : ScienceAlert
Engineers Propose an Ambitious Plan to Bury Excess Carbon at The Bottom of The Ocean : ScienceAlert
Chilling Glimpse Into Our Future if We Survive Another Million Years : ScienceAlert
10 Days After Its Launch, Orion Has Successfully Entered Lunar Orbit : ScienceAlert