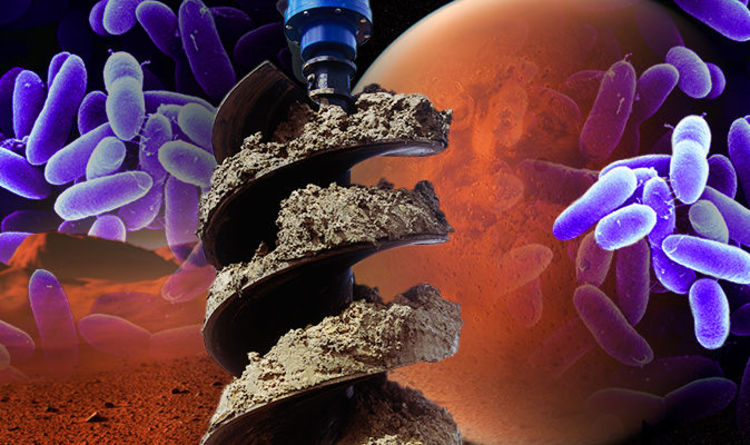 Space agency NASA is perfecting the cutting-edge drilling technology necessary to conclusively prove the existence of life on Mars, Express.co.uk can reveal.

And the mission – dubbed Mars Deep Drill – is set to blast-off to the Red Planet within the next decade.

Brian Wilcox, a NASA space robotics technology manager and JPL fellow, outlined his optimism that extraterrestrial life will be found under the Martian soil.

Mr Wilcox said: “A National Academy of Science presentation only recently reported that the most important thing we can do in astrobiology is to examine a planet’s subsurface.

“At the surface of Mars there is no liquid water and there is quite a bit of radiation and this alone would kill any life form you can imagine because it would break up the genetic material very quickly.


I would expect to find life underground on Mars, because we see evidence of water once existing on its surface

“But the subsurface of Mars is an attractive habitable environment – we know there is a thermal gradient because there are natural radioactive isotopes like uranium present that release heat as they decay.

“This means at some depth you are going to reach the point where ice turns into liquid water.

“And liquid water is often thought to be necessary for life – most planetary scientists in the field agree on this.

“It is now believed there is a depth that liquid water exists on Mars and that depth is less than 10km – it might even be less than a kilometre.”

Adding to evidence that simple life could thrive in outer space is the news that the majority of life on earth is found underground.

The NASA scientists of 35 years said: “I would expect to find life underground on Mars, because we see evidence of water once existing on the surface of Mars.

“Sunlight has ultraviolet which breaks up molecules, so light can be adverse to very simple life forms.

“Being underground in the dark is what life likes to do. It likes to be warm and wet and that is where life loves to thrive.”

The mechanics of the quartz-fused silica wire-lined drill to be used in the mission surprisingly basic – albeit that it will weigh less than 100 kg, due to the strict weight restrictions necessary for space flight

This is achieved by considerably shrinking the contraption so the resulting hole is only 2-3 cm in diameter.

And the soil cuttings from the hole will then be removed using a robotic bailing bucket, before being analysed for evidence of life.

Mr Wilcox explained one of the more ingenious aspects to the mission is the way the system harnesses a combination of sunlight and Mars’ atmosphere to achieve the 100 Watts required to power two parts of the system.

He said: “The system is powered by liquid carbon dioxide, because it is the one fluid we have access to.

“We will use it as a hydraulic fluid by compressing the CO2, and forcing it to go from a gas into a liquid due to the temperatures on Mars, and when it is released as a blast that turns back into gas.”

Mars Deep Drill: The NASA mission will blast-off to the Red Planet within the next decade (Image: Getty/NASA)

And CO2 will also be used to flush broken rock from the drill bit, he explained.

He said: “Deep drilling needs the drill bit to be kept clean and lubricated and the cuttings to be carried away.

“The good thing about CO2 is when it is it turns into a gas once released and so it expands more than hundred times, and that expansion blows the cuttings off the drill bit and this high velocity gas carries the drill cuttings up into the bailing bucket.”

Sterilising the equipment is vitally important – which is a major lesson learned from the Viking Lander mission to Mars in the 1970s, according to the NASA engineer.

He said: “The International Space Treaty requires the prevention of earth life contaminating the other planets.

“What we don’t want to happen is to discover sometime in the future that e-coli, for example, has inadvertently run amok all over the planet, destroying any life that was there.

“Great attention has therefore been paid to sterilising everything beyond a shadow of a doubt.

“The Viking lander which first looked for life on Mars in the 1970s was heated to around 130 C for 48 hours – at the time it wasn’t then understood there are organisms which actually thrive in these conditions, such as in Yellowstone, so we now know that temperature is insufficient.

“Our current prototype is able to work at 300 C.

“We want exactly zero risk that we will contaminate the underground environment of Mars – especially if we encounter liquid water.”

Mars Deep Drill: The most important thing to do in astrobiology is examine a planet’s subsurface (Image: Getty/NASA)

When asked to predict what form life the would present, the JPL engineer said: “We are probably not talking about photosynthetic life, these are life forms that live on chemical disequilibrium.

“It would be the same kind of life we find around hydrothermal vents in the mid ocean ridges.

“This kind of life which is powered by combining them and extracting the energy from chemicals.

“We believe that is quite possible.”

Robot Shows It’s Possible to Swim Through The Emptiness of a Curved Universe : ScienceAlert
Minor Google Meltdown Exposes The World’s Utter Reliance on a Single Tech Company
This Seemingly Simple Foot Feature May’ve Allowed Sauropods to Become Giants : ScienceAlert
Astronomers Charted The Sun’s Life, And This Is How The Story Ends : ScienceAlert
The Moon Stole Something From Deep Inside Earth Eons Ago, and Scientists Can Prove It : ScienceAlert