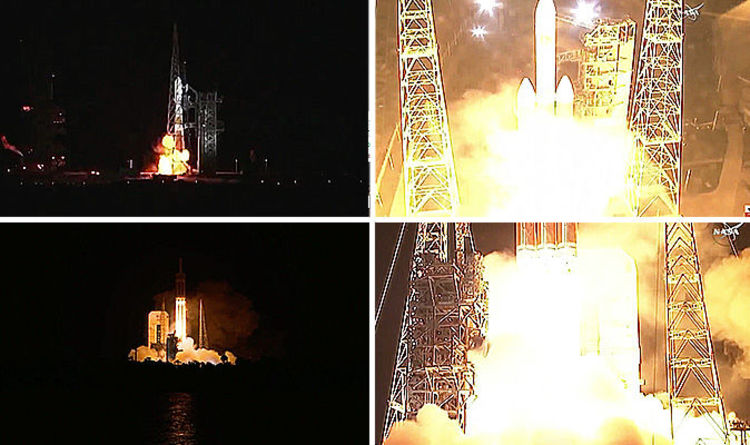 
The Parker Solar Probe took off this morning from the Kennedy Space Center in Florida after NASA was forced to postpone the launch on August 11.

The spellbinding footage shows Parker’s engines ignite propelling the probe towards the sun to start its seven-year-long mission to explore the Sun.

Parker can be seen slowly making its way towards space passing through some clouds before disappearing into the atmosphere.

The delicate instrument comes equipped with an array of instruments and tools which will scan the Sun for solar winds and magnetic fields.

To shield the probe from the Sun’s intense heat and radiation, the Parker probe is armed with a novel carbon-composite shield.

The car-sized probe will utilise Venus to try and achieve an orbit around the sun by helping to slow it down.

Parker will enter the Sun’s atmosphere to sample conditions around our star, reaching as far as 6.16 million km from the Sun’s scorching surface.

Dr Nicky Fox of Johns Hopkins Applied Physics Laboratory said: “I realise that might not sound that close, but imagine the Sun and the Earth were a metre apart. Parker Solar Probe would be just 4cm away from the Sun.

Yanping Guo, who designed the mission trajectory, said: “The launch energy to reach the Sun is 55 times that required to get to Mars, and two times that needed to get to Pluto.

“During summer, Earth and the other planets in our solar system are in the most favourable alignment to allow us to get close to the Sun.

“To get to Mars, you only need to increase slightly your orbital speed. If you need to get to the sun, you basically have to completely slow down your current momentum.”