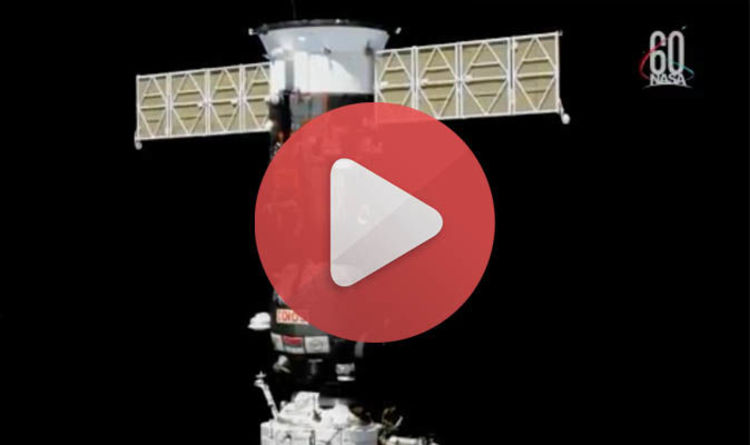 Courtesy of NASA’s round-the-clock online broadcasting, their journey towards Earth is being live streamed for the world to watch.

NASA’s live landing coverage, which you can watch for free below, will kick off at approximately 11.30am BST (6.30am EDT).

Earlier on Wednesday, October 3, Commander Feustel handed over the keys to the space station to crewmate Alexander Gerst of the European Space Agency (ESA).

The crucial handover completed Expedition 56’s 197-day mission in space which saw the team make 3,152 orbits around the planet and travel more than 83.4 million miles.

NASA said: “During their time on the orbiting laboratory, the crew of Expedition 56 carried out science experiments ranging from physics to biological studies and conducted tests to expand navigation capabilities in preparation for future travel far from Earth.

“They also participated in NASA’s Year of Education on Station, which links students on Earth directly to astronauts aboard the space station.”

The NASA TV live stream began at 5.30am BST (12.30am EDT) with a final farewell and hatch closure on the Soyuz spacecraft.

At 8.30am BST (3.30am EDT) NASA’s camera’s followed the Soyuz as it undocked from the ISS and set off towards Earth.

The next part of NASA’s programming will follow the Russian-built capsule as it barrels towards the Kazakh steppes.

Once the Soyuz capsule crash lands in Kazakhstan, a rescue helicopter will pick up the three astronauts and take them to the recovery staging city in Karaganda, Kazakhstan.

After that, the astronauts will go their separate ways, with Mr Feustel and Mr Arnold boarding a NASA plane back to Houston, Texas.

Mr Artemyev will head back to his hometown of Star City, Russia.

Mr Feustel tweeted on October 2: “Special thanks to the crew of Expedition 55 and 56 for their support and participation in our human space exploration mission.

“I am ever thankful for the support of my family, friends, and colleagues.

ISS Expedition 57 officially began its duties today when the Soyuz spacecraft undocked from the lab.

The three-person crew will operate the space station until October 11 when the next group of residents docks with the ISS.

The next two astronauts to visit the ISS are NASA’s Nick Hague and Roscosmos cosmonaut Alexey Ovchinin.

The two astronauts will launch towards the ISS aboard a Soyuz MS-10 spacecraft from the Baikonur Cosmodrome in Kazakhstan.

The Moon Stole Something From Deep Inside Earth Eons Ago, and Scientists Can Prove It : ScienceAlert
Deep-Sea Sponges Can ‘sneeze’ Out Mucus, and The Footage Is Weirdly Mesmerizing : ScienceAlert
Record-Breaking Experiment Could Solve a Huge Challenge in Quantum Computing
New Predictions Reveal The Fate of The World’s Biggest Ice Sheet if We Don’t Act : ScienceAlert
Extreme Drought in Italy Reveals Hidden Bomb Submerged in River Since WWII