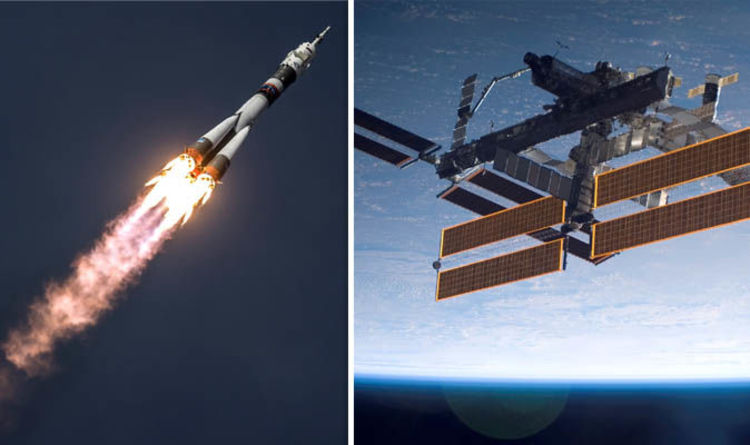 
A source close to the Russian space agency Roscosmos was quoted by Russian news agency Tass as saying: “Traces of drilling have been found not only inside the spacecraft’s living compartment.”

The anonymous source explained there was also damage “on the screen of the anti-meteorite shield that covers the spacecraft from the outside and is installed 15 millimetres (0.59 inches) from the pressurised hull”.

The source added: “During the analysis of those images, traces of drilling were found on the anti-meteorite shield.

“The top of the drill came through the pressure hull and hit the non-gas-tight outer shell.”

Moscow had already suggested there was a possibility the leak was man-made earlier this month.

Dmitry Rogozin, head of Roscosmos and a close ally of Russian president Vladimir Putin, said: “We are considering all the theories.

The alarm was first raised by the six astronauts in the Soyuz MS-09 spacecraft on August 30.

Discovering a leak that was causing the ISS to lose oxygen, the astronauts rushed to find and seal the minute hole.

Initially, the leak was thought to have been caused by a tiny meteor hitting the ISS.

But the investigation led by Russia sparked fears the damage had been deliberately made by one or more people.

Those involved in the probe are considering whether the damage was made in space or on Earth.

Workers at Energia Rocket, the Russian manufacturer of the spacecraft, are among the suspects.

Mr Rogozin said: “It is a matter of honour for Energia Rocket and Space Corporation to find the one responsible for that, to find out whether it was an accidental defect or a deliberate spoilage and where it was done – either on Earth or in space.”

One anonymous source at Energia told Russian news agency RIA Novosti “the hole was made on the ground” and that “[t]he person responsible for the act of negligence has been identified”.

But another source within the industry said it is impossible the hole was made on Earth.

The source said: “When Soyuz MS-09 just arrived at the final assembly workshop, it was photographed in detail.

“No hole and no signs of drilling were found.”

However, Roscosmos is refraining from drawing any premature conclusion, as agreed during a phone call with its US counterpart NASA.

NASA said in a statement: “The Administrator and the General Director noted speculations circulating in the media regarding the possible cause of the incident and agreed on deferring any preliminary conclusions and providing any explanations until the final investigation has been completed.

“They affirmed the necessity of further close interaction between NASA and Roscosmos technical teams in identifying and eliminating the cause of the leak, as well as continuation of normal ISS operations and NASA’s ongoing support of the Roscosmos-led Soyuz investigation.

“They acknowledged the entire crew is dedicated to the safe operation of the station and all docked spacecraft to ensure mission success.”