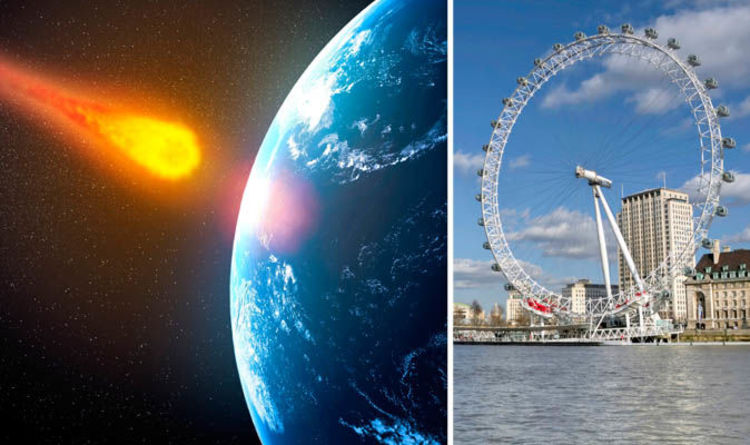 
Asteroid 2018 SM1 is expected to make a so-called Earth Close Approach in the afternoon of Thursday, September 27.

NASA estimates the space rock will reach its closest distance to Earth about 12.42pm UK time (11.42am UT) to an uncertainty of less than one minute.

Asteroid SM1 is a monstrous Apollo-type Near-Earth Object (NEO) with an orbital path similar to that of Asteroid 1862 Apollo.

The asteroid is classified an NEO because it comes within 1.3 astronomical units (au) or more than 92.95 million miles (149.59 million km) of our home planet.

The incredible distance is roughly equivalent to 6.8 lunar distances (LD) or 6.8 times the distance between the Earth and the Moon.

The last time Asteroid SM1 came this close to Earth was on the night of October 17, 1962.

According to NASA’s Jet propulsion Laboratory (JPL) and the Center for Near Earth Object Studies at the California Institute of Technology, the asteroid measures anywhere between 239 ft and 524.93 ft (73m and 160m).

If NASA’s super estimate is correct, the formidable space rock is larger than the Big Ben clock tower, St Paul’s Cathedral and the London Eye.

If the lower estimate is more accurate, Asteroid SM1 is still catastrophically large and bigger than Tower Bridge and Westminster Abbey.

The asteroid will pass the Earth tomorrow, barrelling through space at breakneck speeds of 12,370.26 mph or more than 5.5 km per second.

After the asteroid safely zips past the planet, it will take a whole two years before it returns to our corner of the solar system.

But Asteroid SM1 is not the only space rock approaching Earth tomorrow and a second, smaller but much faster space rock will appear in the early morning hours.

The space rock is also an Apollo-type NEO and this appears to be its first and last flyby of Earth, according to JPL’s asteroid database.

Asteroid SS1 will reach a nominal distance from Earth almost identical to that of its larger cousin later in the day.