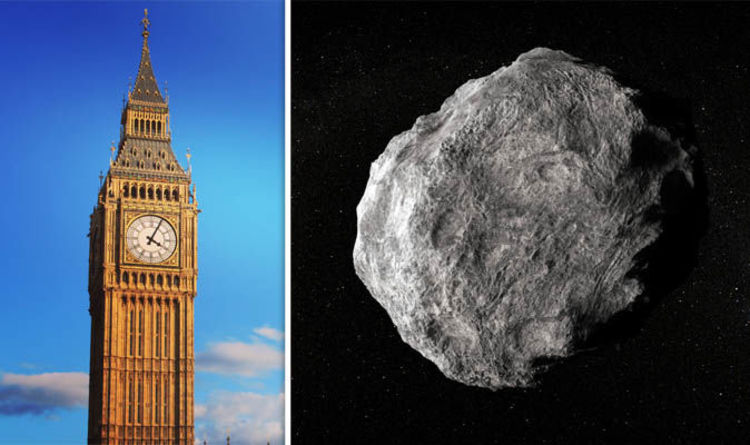 
The monstrous asteroid, dubbed Asteroid 2018 VW, is expected to make its closest approach early this afternoon.

Just six hours later, around 8.04pm GMT, a second and much smaller asteroid will swing by the planet.

At 360.89ft, the asteroid stands taller than Big Ben’s Elizabeth clock tower in London’s Westminster and is about the same height as St Paul’s cathedral.

In other words, the asteroid’s diameter is roughly the equivalent of 10 double-decker buses lined up in a row.

And even at the smaller end of the estimate, the asteroid is a formidable and potentially destructive space rock.

At 154.2ft, Asteroid VW is about as tall as the Arc de Triomphe in Paris and is nearly as tall as Nelson’s Column in Trafalgar Square.

Any asteroid measuring upwards of 65.6ft (20m) has the potential to injure thousands of people if it strikes in a residential area.

The 2013 Chelyabinsk meteor incident, which injured 1,500 people with shattered glass, is believed to have been caused by a 65.6ft-wide (20m) space rock exploding over the Russian city of Chelyabinsk.

Professor Stephen Nelson of Tulane University, South Florida, explained: “Although the Chelyabinsk meteorite probably weighed about 12,000–13,000 metric tonnes, and measured 17 to 20m in diameter before it exploded, scientists were quick to point out that it was very small compared to other objects that could potentially hit the earth.

“The explosion released energy estimated at about 500 kilotons of TNT – about 20 to 30 times more energy than the Hiroshima atomic bomb.

“The event brought to the world’s attention the very real hazards associated with the impact of objects from outer space.”

Thankfully neither of the two asteroids flying by today will come within striking distance of the planet.

Although the US space agency NASA warned the space rocks will make a Close Earth Approach, the asteroids will still be hundreds of thousands or millions of miles away from Earth at their closest.

The distance is equivalent to more than 15-times the distance between the Earth and the Moon.

The second asteroid, dubbed Asteroid 2018 VN1, will zip by from a slightly closer distance of 0.02224au.

This means the asteroid will flyby from more than 2.06 million miles (3.32 million km) or 8.66-times the distance from Earth to the Moon.

NASA said: “As they orbit the Sun, Near-Earth Objects can occasionally approach close to Earth.

‘Baby Brain’ Is Real, Scientists Confirm, And We May Finally Know Why : ScienceAlert
People in Portland Planted Trees. Decades Later, a Stunning Pattern Emerged : ScienceAlert
Mysterious Changes Identified in The Brains of People Who Get Migraines : ScienceAlert
Volcanoes May Have Transformed Venus Into a Blistering Hellscape : ScienceAlert
The Science Behind Why You Sprain Your Ankle So Often, And What You Can Do About It : ScienceAlert