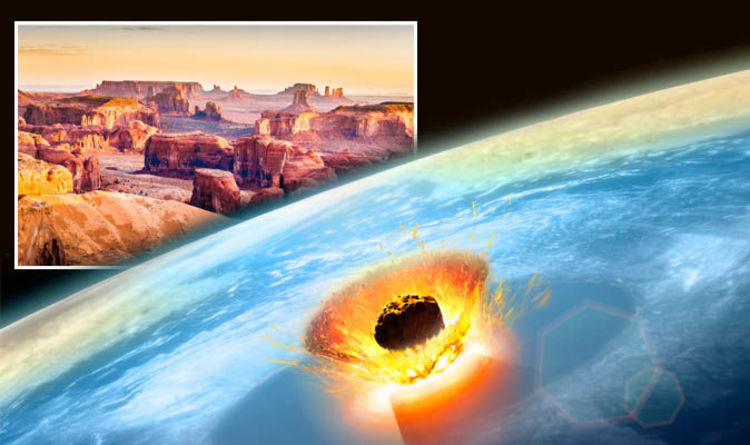 
Asteroid 2015 FP118 is speeding through space on a trajectory that will make a “close approach” on September 3, next month.

At its upper size estimate, the asteroid is bigger than the US Grand Canyon is deep – about 2,600 feet (792m) from the ground up.

An asteroid this big could prove immensely cataclysmic if it were to hit the Earth.

The asteroid believed to have killed the dinosaurs is estimated to have been around 9.3 miles (15km) in diameter but a space rock as small as 140 feet (42.6) wide is dangerous enough to warrant NASA’s interest.

Asteroids 140 feet (42.6) wide and upwards are classed by NASA as potentially hazardous asteroids (PHAs) due to their potential destructive power.

The US space agency said: “Space rocks smaller than about 25 meters, about 82 feet, will most likely burn up as they enter the Earth’s atmosphere and cause little or no damage.

“If a rocky meteoroid larger than 25 meters but smaller than one kilometre, a little more than 0.5 miles, were to hit Earth, it would likely cause local damage to the impact area.

“We believe anything larger than one to two kilometres – one kilometre is a little more than one-half mile – could have worldwide effects.”

In this scenario, even the lower size estimate for FP118 could be absolutely destructive fi it were on a collision course with Earth.

The distances might seem incredibly vast relative to observers on Earth but in the cosmological scale of things they are absolutely tiny.

Asteroid FP118 is classed by NASA as a Near-Earth Object (NEO). NEOs are comets and asteroids within the immediate vicinity of Earth.

Most of these space rocks were nudged towards Earth by the gravitational attraction of neighbouring planets.

But the asteroid’s close approach to Earth does not indicate the space rock is on a collision course with Earth.

NASA said: “It only means there is a possibility for such a threat.

“By monitoring these PHAs and updating their orbits as new observations become available, we can better predict the close-approach statistics and thus their Earth-impact threat.”

The asteroid is currently barreling through space at a speed of 9.77 km per second of 21,854mph.

At this speed, FP118 could fly from London to Glasgow in a straight line in just around two minutes.

Behold, The Epic Last Images Taken by NASA’s Asteroid Redirection Test Spacecraft : ScienceAlert
We Just Got Our Closest View of Europa in 20 Years, And We Can’t Stop Staring : ScienceAlert
Amazing New Fossils Provide Earliest Known Traces of The Evolution of Our Jaws And Limbs : ScienceAlert
Fossil-Filled Australian Caves May Be 500,000 Years Older Than We Thought, Study Finds : ScienceAlert
Watch a Tiny Robot Blob Transform Into Even Tinier Bits to Squeeze Through Cracks : ScienceAlert