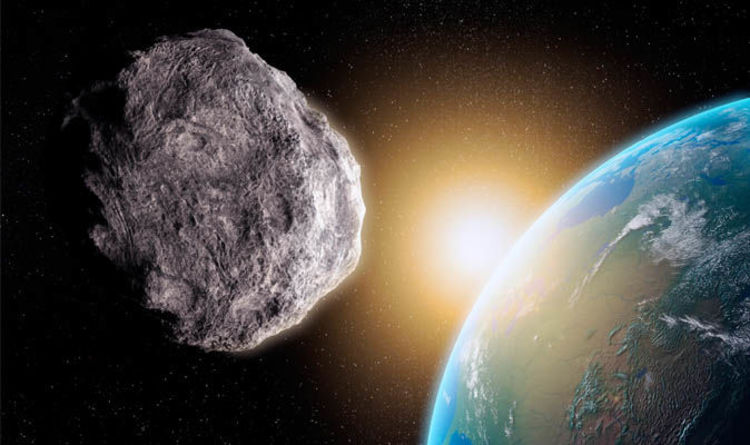 
The speeding space rock is expected to approach Earth at around midday when the two stellar bodies will almost cross paths.

The barrelling asteroid dubbed KW1 2018 will come within 0.39 lunar distances to the Earth, which is just over a third of the distance to the moon.

The average distance from the Earth to the moon measures around 384,400km and the asteroid will close that gap down to 149,000km.

Asteroid KW1’s incredibly close approach marks the second time since May 15 an asteroid will skim past Earth within one lunar distance.

And astronomy enthusiasts will next have to wait another 19 years before KW1 reaches Earth again on September 16, 2027.

NASA classified the rogue space rock an Apollo asteroid and Near Earth Object, or NEO.

Near Earth Apollo asteroid orbits which cross paths with Earth’s orbit have similar trajectories to that of Asteroid 1862 Apollo – a giant asteroid discovered in 1932.

Rocky NEO asteroids are typically found in the warmer parts of the solar system between the orbits of Mars and Jupiter.

NEO comets are typically formed from a mixture of frozen water and dust particles in the outer reaches of the solar system.

NASA explained: “The vast majority of NEOs are asteroids, referred to as Near-Earth Asteroids (NEAs).

“NEAs are divided into groups, Atira, Aten, Apollo and Amor, according to their perihelion distance, aphelion distance and their semi-major axes.”

Because these asteroids are rich in carbon-based molecules and liquid water, many scientists speculate the collisions of these objects with Earth may have had a crucial role in the development of carbon-based life.

Do You Need to Drink Eight Glasses of Water a Day? It’s Complicated : ScienceAlert
Crocodiles Seem to Be Thriving in a Toxic River That’s More Like a Sewer. Here’s Why : ScienceAlert
A Tobacco Plant Has Been Engineered to Produce Cocaine in Its Leaves : ScienceAlert
Forests at Risk of Burning an Extra 30 Days a Year Without Climate Action : ScienceAlert
Scientists Glimpse Incoming Asteroid Just Hours Before It Makes Impact : ScienceAlert