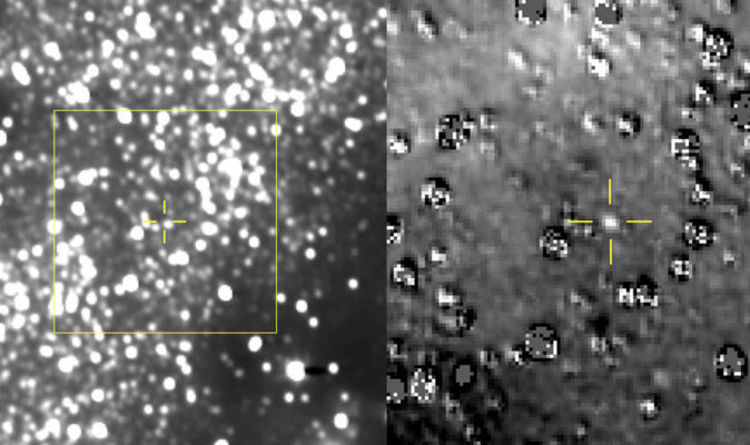 
The impressive sighting was accomplished on August 16 and the spacecraft has now sent back almost 50 images.

NASA space agency has now told the public New Horizons – a space probe which was launched in 2006 – will make its way to a small icy object in the Kuiper Belt, a circumstellar disk on the outside of our solar system full of asteroids and space rocks, called Ultima Thule.

Some 12 years after being launched from Earth, New Horizons has only recently made it to Pluto, which is 7.5 billion kilometres from Earth.

However, such is the size of the solar system that the spacecraft will have to travel for another six months before it reachers Ultima Thule – which is a further 170 million kilometres.

Alan Stern, the principal investigator for New Horizons and a planetary scientist at the Southwest Research Institute, said: “We now have Ultima in our sights from much farther out than once thought possible.

“We are on Ultima’s doorstep, and an amazing exploration awaits!”

What makes New Horizons’ discovery even more impressive is that in the image, there are millions of background stars.

Hal Weaver, a New Horizons project scientist at the Johns Hopkins University Applied Physics Laboratory, said: “It really is like finding a needle in a haystack.

“In these first images, Ultima appears only as a bump on the side of a background star that’s roughly 17 times brighter, but Ultima will be getting brighter — and easier to see — as the spacecraft gets closer.”

The flyby will be the closest a spacecraft has ever got to an object in the Kuiper Belt, NASA said in a statement.

The space agency said: “The Ultima flyby will be the first-ever close-up exploration of a small Kuiper Belt object and the farthest exploration of any planetary body in history, shattering the record New Horizons itself set at Pluto in July 2015 by about one billion miles.”