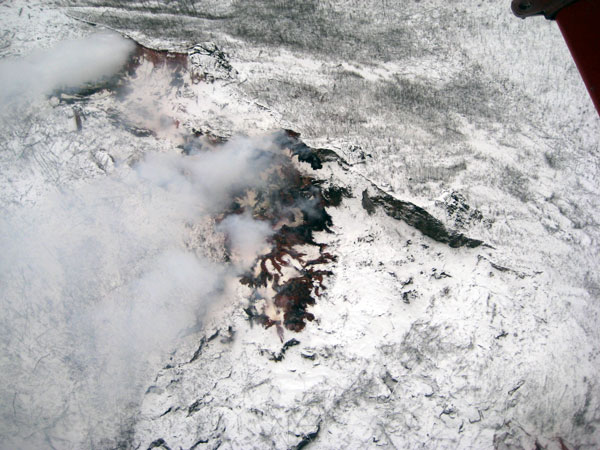 
A mysterious geologic event that is emitting fire, steam and a sulfur smell baffles residents and officials in Eagle, Alaska.

As if a little volcano crater had opened up out-of-nowhere.

Alaska Public reports that a mysterious geologic event occured near Eagle, Alaska, where a large and mysterious crater between 150 to 200 feet formed following an explosion.

Since then fire, steam and a sulfur smell is coming out of the abyssal ground collapse.

The area is located about 25 miles Northeast of Eagle on Doyon land and is very hard to reach. The only overflight photographs available yet show a steaming crater.

NPS and USGS geologists think it is a shale oil rock deposit since the area has already 2 slumping craters, covering an area of more than 5 acres large.

So like the Door to Hell, this fire may have been burning underground for some time and finally burned enough to cause a slump or a crater like depression in the earth. Awesome phenomenon.

Mysterious ‘Zone of Uncertainty’ Inside The Brain Reveals a Surprise : ScienceAlert
Study of 500,000 Medical Records Links Viruses to Alzheimer’s Again And Again : ScienceAlert
Dogs Can Be Aggressive For Lots of Reasons, And One of Them Is You : ScienceAlert
Lightning Strikes Create a Strange Form of Crystal Rarely Seen in Nature : ScienceAlert
Our Body Temps Have Been Dropping For 160 Years. Gut Microbes May Be Playing a Role : ScienceAlert