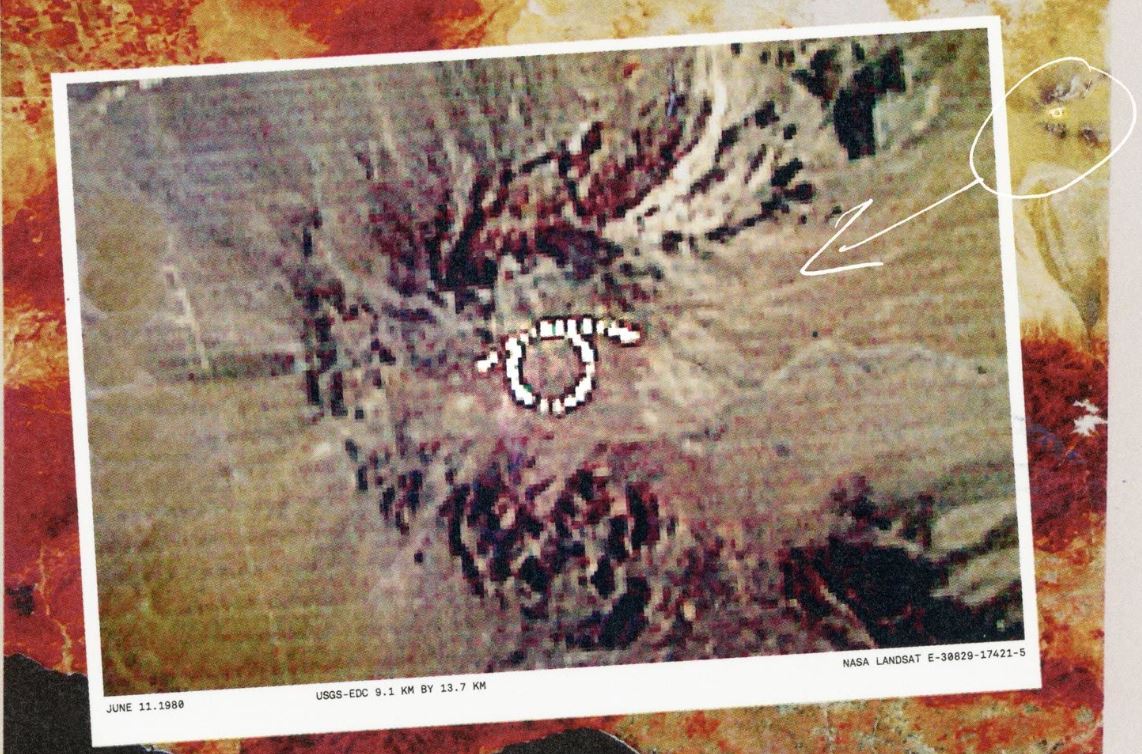 
In 1980 a small team of friends designed a matrix of mirrors a mile wide, in the shape of a human eye in the Mojave desert.

The mirrors were painstakingly engineered to reflect sunlight at the exact angle to be captured by a NASA Landsat satellite, 600 miles above Earth.

The whole story can be read at SuperCluster or below:

Art is ever-present as we reach toward space. Alan Bean, fourth man to walk on the moon, was an artist. And we capture countless beautiful photographs of the cosmos — each a kind of artwork in its own way. More recently, objects launched to orbit were designed to stoke wonder and imagination on the ground, like Rocket Lab’s (controversial) Humanity Star.

But in 1980, one artist pulled off something that had never been attempted, and in four decades has never been repeated.

Tom’s plan was ingenious, and exceedingly difficult. He knew Earth observation satellites were making routine imaging sweeps of the planet. If he could angle a matrix of mirrors in just the right way, over a large enough area, he could reflect sunlight directly into a satellite’s camera. If he pulled this off, his mirrors might create art visible for only a single subject: a lone satellite, quietly orbiting Earth.

Each mirror measured about two feet on each side

“When I was with Tom over 35 years ago, he got an idea from an engineer on the East Coast who had taken some mirrors to reflect sunlight into a little point of the sky where he knew a satellite was going to be,” said Lisa Pompelli, Tom’s ex-wife, who also lives in California. “He somehow got this huge team [of] Los Angeles surveyors onto the idea of helping him making this arc of mirror stations. That was one thing that was impressive about Tom, the way he could make that transfer between the art world and technology and pretty in-depth science, and then turn it into a piece of artwork.

The satellite Tom and his team of friends and surveyors picked was NASA’s Landsat 3, which was on a polar orbit about 1,000 kilometers(600 miles) above Earth. While NASA wasn’t directly involved, it did provide Tom with the coordinates needed to succeed.

“Tom and other people got interested in how you could work with some of these satellites that would record what was happening on the ground,” said Robert Malina, an astrophysicist from the University of Texas at Dallas and an avid space art enthusiast who met Tom on several occasions.

The team would have only a brief window in which to make the project possible. The satellite, which launched in 1978, orbited Earth from pole to pole 14 times a day, eventually capturing the whole planet as it rotated underneath. But it took 18 days for it to repeat an imaging cycle, and any one location might be seen for just minutes in this time frame. So the team would need to time their project to align with a brief period when the satellite was overhead.

They chose a remote spot in the Mojave Desert north of Los Angeles, in a valley between two mountains. One reason for this location was the lack of construction or grid lines nearby, allowing for the finished photograph to be devoid of infrastructure.

Next, the team assembled 90 mirrors, each about 0.6 by 0.6 meters (2 by 2 feet.) With the help of surveyors, Tom designed a system using stakes and a trough to angle the mirrors. The angle of each could be changed easily, depending on where the satellite would be passing in the sky overhead. They had to take into account Earth’s rotation, satellite speed, and the position of the Sun in the sky to angle each mirror.

Owing to the low resolution of satellite photography at the time, each group of three mirrors would saturate the telescope’s camera, and shine as bright as an acre in the image. Such an image would not be possible today, as modern satellite camera technology is simply too good. Tom struck at the perfect moment, when the technology for this sort of project was available, but before it became so advanced as to render the artwork impossible.

With much of the team camping out nearby, the project went into full flow. The mirrors were placed in 30 groups of three, each separated by a few hundred meters, to increase the chances of one of them reflecting sunlight into the passing telescope, which pitched and rolled as it orbited Earth. In total, the mirrors spanned an area about 2.5 kilometers (1.5 miles) across.

This was the age before the internet or cell phones, so getting information on a satellite’s orbit was not easy. Tom would drive to a nearby town about 20 miles away, use a phone booth, call NASA’s Landsat satellite team at Goddard in Maryland, and write down coordinates for the satellite. Then he’d race back to the site, to perfectly angle each mirror.

“He had a pad of paper in the phone booth, he’d go over all of the numbers, and then jump back in the car and drive out to make adjustments,” said Lisa.

And there was the issue of cloud cover, too. On several occasions the team were ready to go, only to be thwarted by an exceedingly overcast day. They would have to wait days after each failure for the satellite to make another pass.

But on June 11, 1980, everything finally came together. The sky was clear, the satellite was passing overhead, and the mirrors had been angled correctly. With any luck the team’s efforts would be successful, but without the internet, they would have to wait for news from NASA. The following day, the team packed up the mirrors and hoped for the best.

A few days later, NASA sent a set of images taken by the satellite. To the south was Los Angeles, with the Californian coast stretching out to the west. But there — tucked away in the upper right-hand corner between mountains that looked like eyebrows, were dozens of points of light arranged like a giant human eye. As the team marveled at the image, the shining eye peered back at them.

“It was pretty thrilling when we finally saw it. There it was,” said Lisa. “It took an amazing amount of time and focus and energy, and a tremendous amount of problem solving.”

Lisa Pompelli at the mirror site

Amusingly, the eye was actually missing one of its upper sections. This, the team discovered when they traveled back to the site, was because a jackrabbit had jumped on one of the mirrors and knocked it out of alignment. “There were jackrabbit footprints all over the mirror,” said Lisa. Nature had added her own aesthetic flourish to the piece.

Jackrabbit aside, the project was hugely successful. Tom, with his artwork calculated at 100,000 times larger than a human eye, had invoked both a sense of scale, and a sense of human perspective. “Tom’s project was conceptually clear and technologically feasible,” said Roger. “It wowed me. I can remember we were all excited.”

Aside from the artistic appeal, Reflections from Earth – also known as the Shadow Mountain Eye – was a stunning technological achievement. Tom had plans to create portable mirror systems that anyone could use to replicate the image, but this never came to fruition. He did, however, go on to create many more successful works of art relating to space. He continues to live in California, but is sadly in poor health today.

At a time when much of the world seems increasingly polarized, perhaps Tom’s project is more relevant today than ever before. In the blink of an eye, it gave us just a little glimpse of how a seemingly routine space mission can be used to create something wonderful.

Bacteria Can Use Plastic Waste as a Food Source, Which Isn’t as Good as It Sounds : ScienceAlert
Our Body Temps Have Been Dropping For 160 Years. Gut Microbes May Be Playing a Role : ScienceAlert
Sword Mistaken For Replica Is Actually An Ancient 3,000-Year-Old Weapon : ScienceAlert
One Simple Idea Makes It Much Easier to Manage Your Weight Over Time : ScienceAlert
There’s a ‘Lost City’ Deep in The Ocean, And It’s Unlike Anything We’ve Ever Seen : ScienceAlert