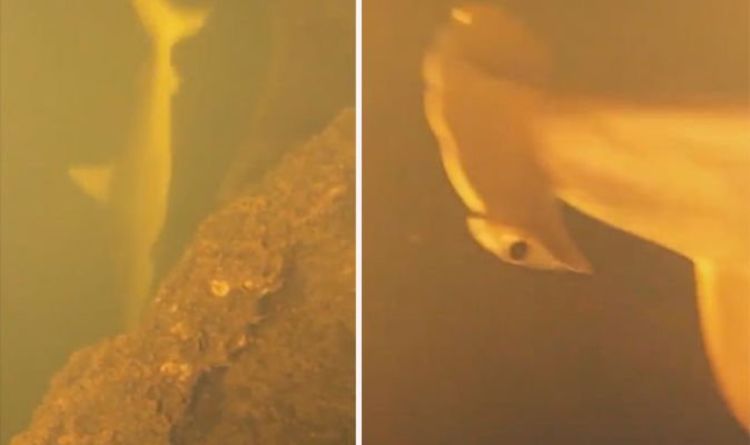 
Stunned marine experts from National Geographic found the hammerhead sharks and rays drifting in Kavachi, an active volcano off the coast of New Guinea. The volcano last erupted in 2014 so the crew were shocked to find not just life but large carnivores circling its turbulent base. Ocean engineer Brennan Phillips told National Geographic: “The idea of there being large animals like sharks hanging out and living inside the caldera of this volcano conflicts with what we know about Kavachi, which is that it erupts.

“But when it’s erupting there’s no way anything could live in there.

“So to see larger animals like this that are living and could potentially die at any moment brings up lots of questions.

“Do they have some sort of sign that it’s about to erupt?

“That’s what makes discovering these animals down inside the volcano so perplexing.

“They’re living in a place where they could ‘die at any moment,’ so how do they survive?”

“It’s very turbid, so the water is very cloudy. None of these things are good for fish.”

The area is now colloquially known as ‘Shark-ano’.

Scientists believe the sharks must have mutated to survive in the hot and acidic environment.

New Guinea is located on the Pacific Ring of Fire – a string of tectonically active zones prone to volcanoes and earthquakes that circles the Pacific.

We May Finally Know How Lightning Gets Its Zigzag Shape : ScienceAlert
Some People May Make Extreme Snap Judgements About You Thanks to Face-ism : ScienceAlert
Grim Study Shows 10 Years of ‘Carbon Offsets’ in California Had No Climate Benefit : ScienceAlert
An Unexpected Source Might Be Helping The Universe Glow More Than It Should : ScienceAlert
A Strange Thing Happens to Wolves Infected by Infamous Mind-Altering Parasite : ScienceAlert