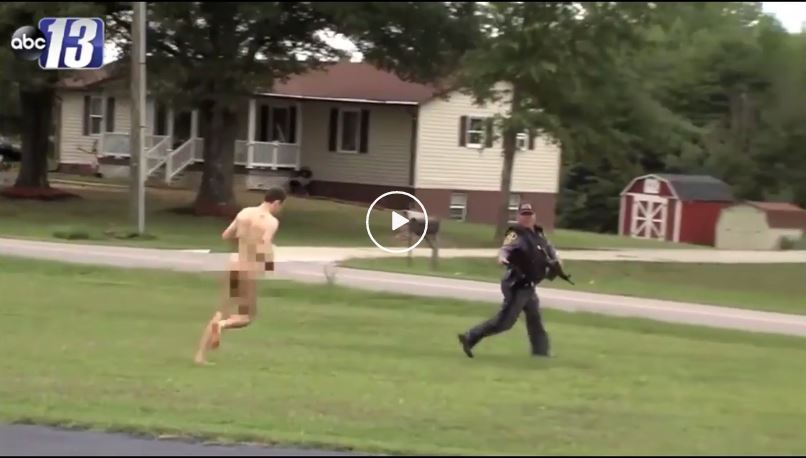 
This crazy guy running naked in the video is thought to have killed three people in Virginia.

Wow, this guy killed three people and police still refused to shoot at him. Guess being naked is a good strategy to not get shot by the cops.

I don’t know what the police officer is doing in this video. Instead of arresting this young and naked murderer – that killed two woman, a child and a dog – he’s just running away, fearing being touched by his genitals! Yes, this is funny at first, but then you find out he’s not just bugfuck crazy…

As reported by USA Today:

Virginia sheriff’s deputies on Tuesday arrested a naked man wanted in connection to a triple homicide that left two women and a child dead.

Before he was arrested, Matthew Bernard, 18, ran at a reporter at the scene, was maced by an officer and choked a church caretaker — all while naked, according to video captured by Virginia TV station WSET-TV.

In the video, which was shared on WSET’s Facebook page, Bernard is seen running at an officer, who runs away. The officer eventually sprays mace in Bernard’s direction and Bernard moves toward the cameraperson recording the video.

The video cuts away and Bernard is next seen running at a person near a car. Bernard begins to to choke the person before the officer intervenes. WSET identified the person as a church caretaker.

Eventually, Bernard is captured by officers using a K-9.

Earlier in the day, Pittsylvania County’s public safety Facebook page asked citizens to be on the lookout for Bernard and advised he was armed with a rifle and “very dangerous.”

The page followed that post with an update saying Bernard had been located.

Taylor said deputies responded to a 911 call around 8 a.m. Tuesday. Law enforcement arrived to find a woman dead in the driveway. When deputies entered the house, they found two more bodies, a woman and a child, according to Taylor’s statement.

Two of the victims were the wife and child of Blake Bivens, a Double-A pitcher in the Tampa Bay Rays organization. ESPN on Tuesday reported that Bernard is the brother of Bivens’ wife. The sheriff’s office did not confirm the identities of any of the victims.

“The names of the deceased are being held until family members are notified,” Taylor said. “Investigators are still on-scene collecting evidence and interviewing witnesses. A first court appearance has not been scheduled.”

Police were trying to arrest Bernard when he led them on a foot chase Tuesday. At one point, Bernard attacked a church groundskeeper standing nearby. The officer tried to stop him with mace and a stun gun.

Eventually, Bernard was taken into custody.

Authorities have not identified the murder victims.

Officials said a neighbor found one woman dead in a driveway. The other two bodies were discovered inside the home.

Yes, this is funny at first, but then you find out he’s not just bugfuck crazy… He’s killed two women and a child.

Mysterious ‘Zone of Uncertainty’ Inside The Brain Reveals a Surprise : ScienceAlert
Our Body Temps Have Been Dropping For 160 Years. Gut Microbes May Be Playing a Role : ScienceAlert
Scans of Mummified ‘Golden Boy’ Reveal He Was Covered in Magical Protections : ScienceAlert
Scientists Reveal The Most Distant Galaxy We’ve Ever Found : ScienceAlert
JWST Has Found Life’s Elemental Building Blocks in The Depths of Darkest Space : ScienceAlert