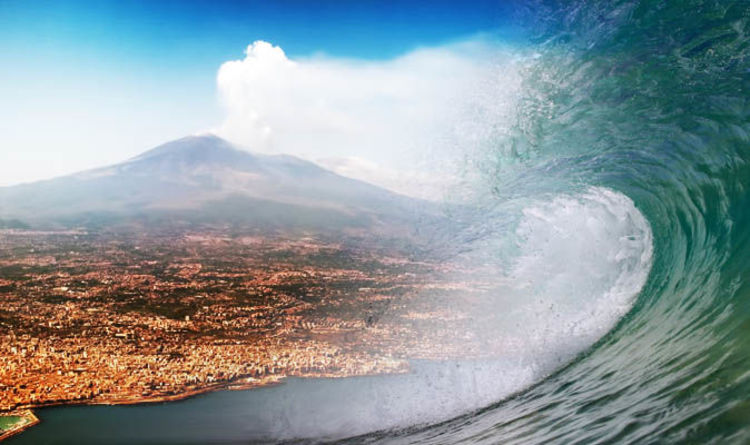 
Analysis of the active volcano has found Etna is gradually creeping towards the sea under the bulk of its own weight.

The slow movement has caused one of the volcano’s sides on the east of Sicily to dangerously weaken.

If the volcano collapses into the sea, it “could lead to a tsunami” in the popular Italian holiday destination.

Dr Morelia Urlaub, of the Helmholtz Centre for Ocean Research in Germany, warned large portions of the volcano are “continuously slipping into the sea”.

She said: “This movement is important to study as it could lead to a catastrophic collapse of the volcano.

“The results of this study suggest Etna’s flank movement in fact poses a greater hazard than previously thought.”

Etna’s movement towards the Mediterranean was already known to scientists.

In March this year, scientists from the Bulletin of Volcanology confirmed Etna is sliding into the sea at a rate of 0.55 inches (14mm) per year.

But previously it was assumed the creep was caused by the bubbling of molten lava deep inside the volcano.

Dr Urlaub said now lava is causing the volcano to swell in size and mass, destabilising the fiery mountain’s sides.

She said: “Mount Etna is a really big volcano, more than 3,300m, and the lava is making it grow bigger all the time.

“So its own weight is causing the flanks to spread outwards into all directions and this is what we mean with gravitational instability.”

Sicily is home to more than five million residents and another 14 million are estimated to live in the South of Italy.

Thankfully, Dr Urlaub said there is no immediate risk of the volcano collapsing, but the eventuality could be “catastrophic”.

She warned her analysis suggests the risk of flank collapse is a bigger hazard “than previously assumed”.

The volcano expert said: “So Etna’s sliding flank could maybe lead to collapse, but if that happens on human timescales? We don’t know.

“But it is important to be aware of this potential danger so that we can keep an eye on the flank movements.”

She added other volcanoes in Hawaii, the Canary Islands and La Reunion are at a similar risk of collapsing into sea waters.

However, volcanoes will likely take many centuries or even thousands of years to critically destabilise to this point.

A New Study May Have Just Changed The Advice on Storing Tomatoes in The Fridge
Boys End Up in Hospital After Trying to Gain Superpowers From a Black Widow Bite
Scientists Have Used Fast Radio Bursts to Find The Universe’s Missing Matter
Many Astronomers Now Think Planet Nine Might Not Exist After All, Here’s Why
Astronomers Just Found an Extremely Rare ‘Ring of Fire’ Galaxy in The Early Universe