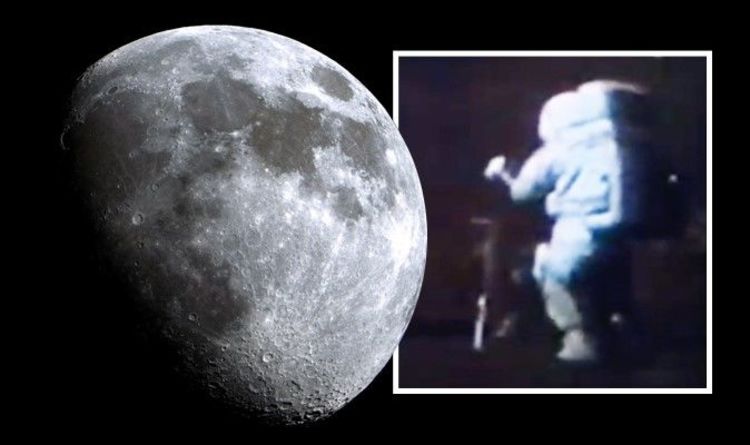 
According to Streetcap1, NASA original video he found shows two astronauts preparing to plant a vacuum into the ground on the Moon in an attempt to recover materials.

One then begins to hammer the object into the surface as the other watches.

But it is the sound of the hammering that has led Streetcap1 to say the footage could not have happened on the Moon.

In space, and on the Moon, there is no air meaning there are no vibrations for sound to travel through.

That means there should not be any noise coming from the hammering, according to Streetcap1, who is based in Scotland.

In a promotion for his YouTube video, he said: “All astronaut communication is through headset radio.

“Vibrations cannot travel through the vacuum even to the astronaut’s radio, so the hammer strokes should be silent, yet we can hear them.

“Conclusion: Either there is air on the Moon or NASA faked the Apollo 15 program.”

He has convinced some followers.

One wrote: “Sound can definitely travel in a studio. Wake up to the hoax people.”

Another added: “How would NASA explain that? A real and authentic NASA answer would be very interesting.”

But one viewer said it could have happened on the Moon.

He said: “As he hammers the vibrations of the sound travel up his arms and into the suit’s mic, Dailystar.co.uk reports.

“That’s why the hammering is so dull.”

The 49th anniversary of Neil Armstrong’s first steps on the lunar surface take place in July, but many conspiracy theorists across the globe remain convinced it was the biggest cover up of all time.

Moon hoax conspiracy theorists say a desperate President John F Kennedy, who wanted to beat the Russians in the space race to the moon, ordered the production of a series of films in top-secret studios to make it look like Nasa astronauts made it to the lunar surface.

Streetcap1 usually hunts through NASA footage for UFOs, but has been increasingly looking at the Moon landings and appears to now believe they were staged.

There are as many sceptics who debunk Moon landings hoax claims as there are deniers.

NASA does not comment on indiividual conspiracy theories, however, it has insisted repeatedy that the Moon missions were not faked.

Our Body Temps Have Been Dropping For 160 Years. Gut Microbes May Be Playing a Role : ScienceAlert
Dogs Can Be Aggressive For Lots of Reasons, And One of Them Is You : ScienceAlert
People Who Don’t Exist Look More Real Than Actual People, Study Finds : ScienceAlert
Scientists Reveal The Most Distant Galaxy We’ve Ever Found : ScienceAlert
JWST Has Found Life’s Elemental Building Blocks in The Depths of Darkest Space : ScienceAlert