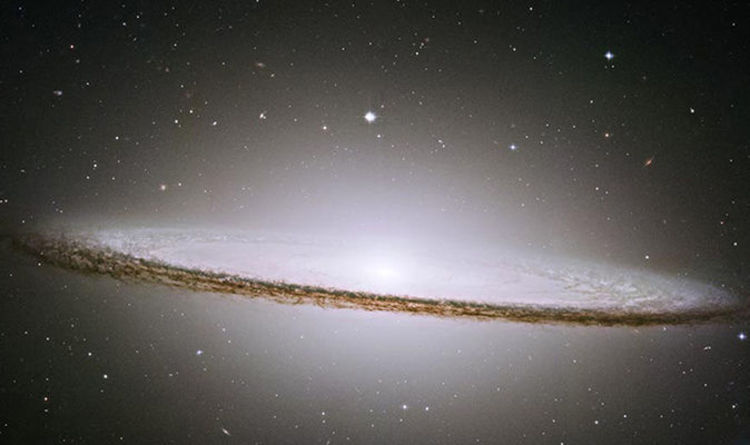 
Dr Christian Wolf of the ANU Research School of Astronomy and Astrophysics said: “This black hole is growing so rapidly that it’s shining thousands of times more brightly than an entire galaxy.

“The heat radiation from the matter falling into the black hole, which is the light we see, is a few thousand times brighter than our own Milky Way galaxy.”

Researchers at the Australian National University discovered the supermassive black hole, also known as a quasar, when a telescope called Skymapper indicated that the object could have been of potential interest.

They then used data from the European Space Agency’s Gaia satellite to determine its distance from Earth.

They found that it took more than 12billion years for the light from this massive black hole to reach Earth.

It is the brightest quasar that can be seen in visual or ultraviolet light.

It is also thought the object is no less than the size of 20billion of our suns.

“These large and rapidly-growing black holes are exceedingly rare, and we have been searching for them with SkyMapper for several months now.

“We don’t know how this one grew so large, so quickly in the early days of the Universe,” he added.

Wolf noted that scientists are perplexed at how this black hole got so large, as its existence puts into question the established science on black holes.

“So, either black holes can grow faster than the speed limit, but we don’t know how that works, and we have not seen it yet in action, or there is an unknown way to make 5000 solar mass black holes very close in time to the Big Bang,” he said.

“But who knows what happened in the dark early ages of the universe?”

Wolf said because of their intense brightness, these gigantic objects can be used as place-holders to advance the study of the formation of elements and shed some light on the Big Bang theory.

The object is so bright “scientists can see the shadows of objects in front of the supermassive black hole,” Wolf added.

“Fast-growing supermassive black holes also help to clear the fog around them by ionising gases, which makes the Universe more transparent.”

These Mysterious Fungi Belong to an Entirely New Branch on The Tree of Life : ScienceAlert
A ‘Wormhole’ Built on a Quantum Computer Teleported Information as Predicted : ScienceAlert
It Sounds Crazy, But Walking Backwards Is Really, Really Good For You : ScienceAlert
Mummies With Golden Tongues Discovered in Ancient Egyptian Necropolis : ScienceAlert
Oldest Known Dog Bone Hints Our Best Friends Were With Us Earlier Than Thought : ScienceAlert