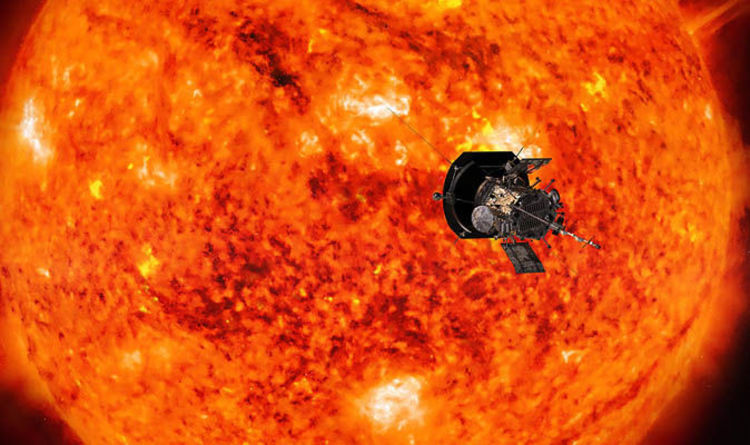 
Nasa’s Parker Solar Probe is expected to withstand temperatures of 2,500F (1,377C) – close to the melting point of steel – as it approaches the surface.

Its mission is to study magnetic fields, plasma and energy particles and capture detailed images of solar winds to help researchers understand more about the corona – the outermost layer of the sun’s atmosphere.

Project scientist Dr Nicky Fox said the advanced technology used to develop the craft will allow scientists “to finally go and understand how our star works”.

She said: “The Parker Solar Probe is going seven times closer than anything has ever been before.

“We’re actually going to be within four million miles of the surface of the Sun. I realise that doesn’t sound very close but if you put the Earth and the Sun one metre apart, Parker Solar Probe would be 4cm from the Sun.

“The mission has been around since 1958 – it’s only now that technology has finally allowed our dreams to come true.”

Weather permitting, the probe will be launched from the Cape Canaveral in Florida at 8.45am tomorrow.

It will travel at a record-breaking 430,000mph – fast enough to cover the distance from London to Birmingham in just one second.

Circling the sun 24 times in the next six years, the craft will use Venus’s gravity seven times to gradually shrink its orbit until it finally comes within 3.8 million miles of the surface in 2024.

In a statement, Nasa said: “The spacecraft and instruments will be protected from the Sun’s heat by a 4.5in-thick carbon-composite shield, which will need to withstand temperatures outside the spacecraft that reach nearly 2,500F.

“The primary science goals for the mission are to trace how energy and heat move through the solar corona and to explore what accelerates the solar wind as well as solar energetic particles.

“Scientists have sought these answers for more than 60 years, but the investigation requires sending a probe right through the 2,500 degrees Fahrenheit heat of the corona.

“This is finally possible with cutting-edge thermal engineering advances that can protect the mission on its dangerous journey.”

Scientists have spent six decades working on the project, expected to cost £1billion.

The Parker probe is named after American astrophysicist Eugene Parker, 91, who developed a pioneering theory on supersonic solar wind in 1958.

The Tonga Eruption’s 50 Million Tons of Water Vapor May Warm Earth For Months to Come : ScienceAlert
Shimmering ‘Lakes’ Under The South Pole of Mars Might Be Something Else Entirely : ScienceAlert
These Are The Most Distant Star Clusters Ever Seen, And We Nearly Missed Them : ScienceAlert
Termites Love Global Warming So Much That They May Make It Worse, Says Study : ScienceAlert
Experts Estimate The Scale of The Nord Stream Pipelines Methane Leak : ScienceAlert