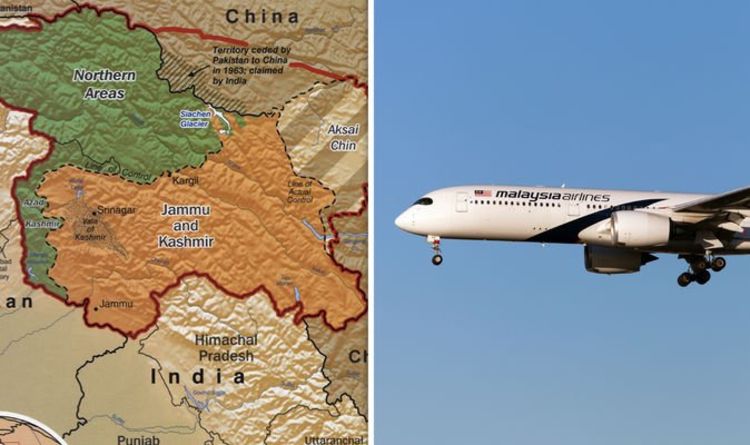 
Malaysia Airlines Flight 370 went missing on March 8, 2014, en route from Kuala Lumpur to Beijing with 239 people on board. The official investigation concluded that, after the plane did a 180 and flew up the Malacca Strait, it then turned and flew south over the Indian Ocean and ended up in the sea west of Perth, Australia. However, two epic search missions came up empty-handed, leading some experts to question whether this was the real route of the plane.

Aviation expert Jeff Wise suggested in his 2015 book ‘The Plane That Wasn’t There’ that MH370 in fact flew north over Asia and ended up in Kazakhstan.

One of the major issues with this theory is: How did none of the countries they flew over notice the rogue plane?

Firstly, Mr Wise claimed, it would have flown over the Andaman Islands, which belong to India, but their radar station is apparently only turned on when a crisis is looming.

The chief of staff of India’s Andamans and Nicobar command said: “We operate on an ‘as required’ basis.”

Then, a straight line track would have seen the plane fly over Assam, India, and then into Nepalese airspace.

As Nepal is a small, poor country with no urgent concerns about aerial attack from India, its military radar is “most likely non-existent”, Mr Wise explained.

However, after this it would reach Kashmir, described as “some of the most disputed territory on earth”.

Mr Wise wrote: “India and Pakistan have been in a state of semi-war of disputed Kashmir for more than half a century.

“India painstakingly monitors its border with Pakistan and frequently intercepts civilian aircraft that stray into its airspace without having complete the proper paperwork.

“Likewise, China and India have been rivals since time immemorial and the two countries fought a border war in 1962.

“In the months before MH370 disappeared, China had unilaterally declared control of airspace over islands claimed by Japan and aggressively intercepted aircraft attempting to enter it.

“To pass over the disputed India-Pakistan border or to penetrate Chinese airspace would be to invite detection and interception.”

However, this is not what the satellite data suggests MH370 did.

In fact, a straight line course that begins at the plane’s last known location and intercepts with the ping ring arc at the correct speed, it appears the plane flew over the boundary between these countries.

This is a special aviation technique that means the plane avoids detection.

Each country believes the plane belongs to the other country and does not interfere.

It is known that whoever likely hijacked MH370 used this technique earlier in its journey – when flying between Thailand and Malaysia’s Flight Information Regions (FIRs).

Both Thai and Malaysian militaries thought the plane belonged to the other and did not raise the alarm.

Former RAF navigator Steve Pearson told Mr Wise that this technique was used by the RAF at times to slip through airspace where they are not supposed to be.

He said: “When we used to go to other parts of the world, you could fly down FIR boundaries and each side thought you were in the other one’s control.