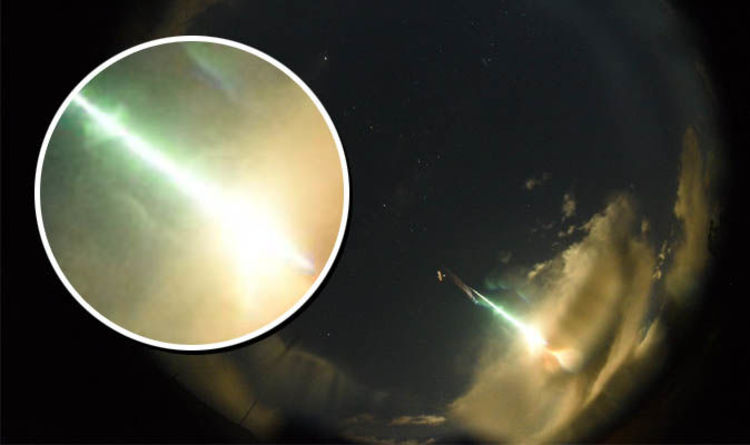 
The fireball zipped through the skies just outside Perth in the early evening hours on Tuesday, August 28.

Eye witnesses reported the barreling meteor to the Department of Fire and Emergency Services around 7.40pm local time (12.40pm BST).

The lucky few who saw the meteor said a bright fireball cut the through sky, followed by a powerful sonic boom.

Others ominously suggested the skies were tumbling down or that an alien UFO made a flyby of the planet.

The Perth Observatory said the fireball was most likely a large meteor bursting into the atmosphere.

The Observatory was sent dozens of CCTV and dash cam videos of the fireball for further study.

Robyn Garratt, who lives 62 miles (100km) east of Perth, was one of the few people who saw the meteor erupt.

She told ABC Radio Perth: “We heard the boom, we saw the light we just thought it was lightning to start with, but the boom that came after it was definitely not thunder.

“In York, people felt a lot more than that. They all went running outside thinking the sky was falling basically.”

Ms Garratt said her windows and house rattled in the aftermath of the fireball’s shockwave.

Scientists are now looking to find where the meteor landed in the hopes of examining it.

Phil Bland, professor of planetary science at Curtin University, will lead a team of researchers from the Perth-based Desert Fireball Network (DFN) to find the meteor.

He said: “Fingers crossed others saw it as they provide really good analysis for us to get a location.”

The DFN runs a network of 52 meteor observatories across Australia.

Its Northam observatory snapped an incredible picture of the bright meteor.

The DFN said on Tuesday: “Our observatory in Northam caught this bright meteor and our app has been going bonkers with citizen scientist reports.

“Recreate your sighting. It’s not aliens, it’s a space rock burning up in our atmosphere.”

But the odds of the meteor reaching the ground are pretty slim – about 95 percent of all space rock disintegrate in the atmosphere before they reach the Earth.

Professor Bland believes the meteor must have been fairly large due to its “unusual” brightness.

He also said the sonic boom which followed the fireball suggests it flew fairly low in the atmosphere.

The meteor expert said: “It also looks like we’ve seen it on multiple cameras which means that we’ll be able to triangulate exactly how it came in through the atmosphere, what its position was, what its speed was, what its size was and work out where it came from in the solar system and if any of it landed.”

This Seemingly Simple Foot Feature May’ve Allowed Sauropods to Become Giants : ScienceAlert
Scientists Gave Young Mice The Blood of Old Mice. Then Things Got Weird : ScienceAlert
Weird Creature With No Butt May Not Be Our Ancient Ancestor After All : ScienceAlert
‘Extreme Heat Belt’ to Snare 100 Million Americans in Decades, Scientists Warn : ScienceAlert
The Moon Stole Something From Deep Inside Earth Eons Ago, and Scientists Can Prove It : ScienceAlert