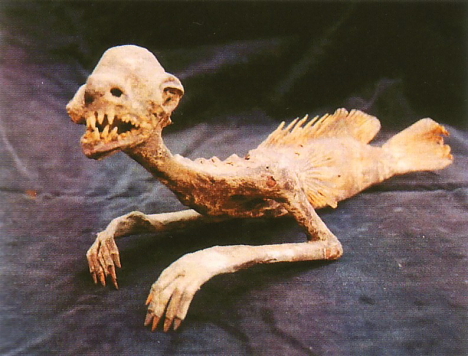 
The oceans are believed to hide mysterious creatures including sea serpents and mermaids, which have captured human imagination for ages.

And as shown below, some appear to be quite terrifying! OMG!

The mummified creature was obtained by Jan Cock Blomhoff while serving as director of Dejima, the Dutch trading colony at Nagasaki harbor. It now resides at the National Museum of Ethnology in Leiden.

Another old mermaid mummy exhibited at a museum in Tokyo and shown below appears to belong to the founder of the Harano Agricultural Museum.

The mummy’s origin is unknown, but the collector says it was found in a wooden box that contained passages from a Buddhist sutra written in Sanskrit. Also in the box was a photograph of the mermaid and a note claiming it belonged to a man from Wakayama prefecture.

The next mummified mermaid can be found at Zuiryuji Temple in Osaka. It was bestowed to the temple as an offering from a Sakai-area trader in 1682.

Another terrifiying mermaid body is preserved at Myouchi Temple in the city of Kashiwazaki in Niigata prefecture.

The mermaid is about 30 cm long and is holding its hands up near its cheeks.

The mermaid is kept in a small wooden chest out of view, but they will allow you to check it out if you ask nicely.

The next photo shows a mermaid mummy at Karukayado Temple outside the city of Hashimoto in Wakayama prefecture.

The 50-cm long mummy has fangs that protrude from its wide open mouth, and both of its hands are raised to its cheeks, like the previous mermaid.

Its lower body is covered in scales. And there appears to be the vestiges of fins on its chest, as well as a pair of nipple-like protuberances.

The mermaid has an unusually large bald head, except from its forehead to its nose.

Its eyes and mouth are open. It has webbed hands with sharp claws, and a 20-cm long tail.

Legend has it that this mermaid appeared to Prince Shotoku (Shotoku Taishi) as he was passing along the shores of Lake Biwa (about 1,400 years ago).

The hideous beast told the prince about how it had been transformed into a mermaid as punishment for making a living as a fishermen within the boundaries of an animal sanctuary.

The mermaid claimed that over many years it had come to a clear understanding of the horrors of destroying life, and that it was prepared to move on to the next world.

As a final wish before dying, though, it asked the prince to establish a temple using the mermaid’s body as a centerpiece, where it could be used to educate people about the sanctity of life.

The mermaid then died. The prince took the mermaid’s body and set up a temple as requested. It is thought to be the Kannon Shoji Temple in Shiga prefecture, which is nicknamed the “mermaid temple.”

But after a number of strange occurrences, the mummy was passed on to another temple. The mummy changed hands several times before ending up at its current location at the base of Mt. Fuji.

I hope you enjoyed this collection of terrifying monster mermaid mummies. If you want some more, I have also written a compilation about demon mummies.

This Physicist Says Electrons Spin in Quantum Physics After All. Here’s Why : ScienceAlert
People Who Don’t Exist Look More Real Than Actual People, Study Finds : ScienceAlert
Scans of Mummified ‘Golden Boy’ Reveal He Was Covered in Magical Protections : ScienceAlert
Babies May Not Be Born With a Microbiome After All, Scientists Say : ScienceAlert
Sword Mistaken For Replica Is Actually An Ancient 3,000-Year-Old Weapon : ScienceAlert