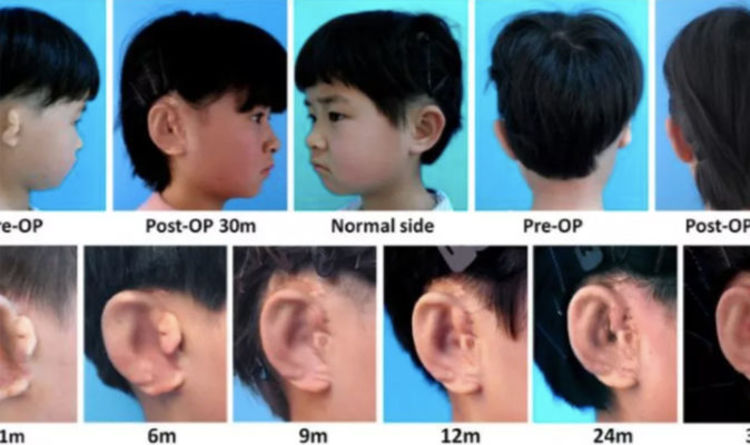 
Five children aged between six and nine-years-old suffered from microtia – a condition which sees the external part of the ear becoming deformed and effects up to 17.4 in 10,000 children.

In the children’s cases, who were all from China, the condition only effected one ear – meaning scientists were able to mirror the healthy ear to grow replacements.

The scientists first made a 3D printed model of the healthy ear then reversed it to create the effected ear.

Scientists then collected cartilage cells from the deformed ear and grew them in a biodegradable mould for three months.

The mould was then grafted onto the children to give them healthy ears.

The researchers said: “The results represent a significant breakthrough in clinical translation of tissue engineered human ear-shaped cartilage given the established in vitro engineering technique and suitable surgical procedure.”

Lawrence Bonassar, a biomedical engineering professor from Cornell University in New York who was not involved in the study, told CNN: “The delivery of shaped cartilage for the reconstruction of microtia has been a goal of the tissue engineering community for more than two decades.

“This work clearly shows tissue engineering approaches for reconstruction of the ear and other cartilaginous tissues will become a clinical reality very soon.

“The aesthetics of the tissue produced are on par with what can be expected of the best clinical procedures at the present time.”

Tessa Hadlock from the Massachusetts Eye and Ear Infirmary, said: “Surgeons have been toying with the idea of removing cartilage tissue from a patient and distilling that tissue into individual cellular components and then expanding those cellular components.

“The thing that is novel about this is that for the first time, they have done it in a series of five patients, and they have good long-term follow-up that shows the results of the ears that were grown from that harvested cartilage.”