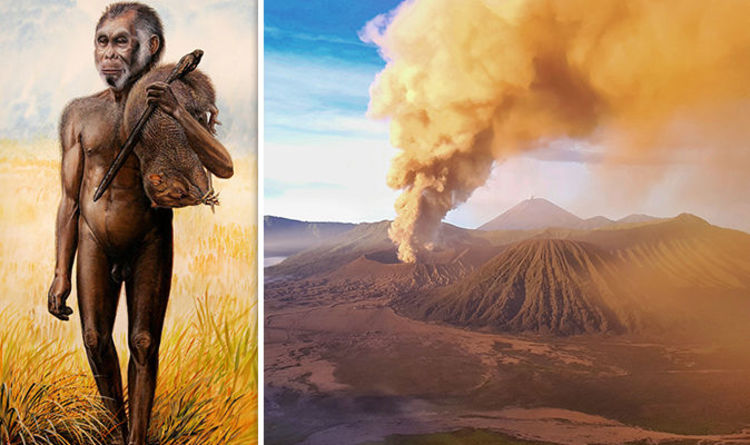 Homo floresiensis was probably wiped out by a volcano eruption (Image: GETTY/Reuters)

A TINY species of human being nicknamed the hobbit was wiped out by a massive volcano eruption near the Indonesian island of Flores where they lived – with a little help from Homo sapiens, a new study has indicated.

Homo floresiensis – which, much like JRR Tolkien’s mythical folk, were barely a metre in height – are believed to have arrived on the island 190,000 years ago, although the means by which they got there is still unclear, as is the reason for their extinction 46,000 years ago.

Now, in a study published in the Journal of Human Evolution, a team of scientists has suggested a volcanic explosion was the chief cause.

These days Flores is one of the few places, other than the island of Komodo, where the fearsome Komodo dragon can be found.

But 50,000 years ago, as well as hobbits, it was home to giant storks, vultures and dwarf elephants (scientific name stegadon florensis insularis) – all of whom disappeared at about the same time.

The team, consisting of eight scientists from various universities in Indonesia, Australia, the United States, Norway and Canada, reached their conclusions after studying sedimentary deposits in the limestone cave of Liang Bua, where all of the Homo floresiensis fossils have been discovered.

During their expedition, they looked at the composition of the various fauna on Flores 190,000 years ago, examining thousands of animal bones and stone tools.

Most importantly, they unearthed evidence of a massive eruption 50,000 years ago.

A picture showing the comparative size between human and hobbit skulls (Image: GETTY)

Their report suggested that successive volcanic eruptions probably had a “major influence” on the species’ extinction by disrupting the ecosystem, making it impossible for them to survive.

Within four thousand years, they had disappeared from the fossil record, along with various animals including the aforementioned stork, vulture and elephant.

However, there may be an additional, and more sinister reason why they died out.

The study also suggests a shift in the type of stone tool being created about 50,000 years ago, from those made of volcanic stone to chert, preferred by Homo sapiens, otherwise known as modern humans – in other words, us.


Our data also suggest that Homo floresiensis and stegadon florensis insularis, along with giant marabou stork and vulture, were extinct by ∼50 ka ago

This could indicate that our ancestors arrived on Flores prior to the eruption and began killed off the hobbits, or possibly the animals on the island they relied on as a source of food.

The report concludes: “There are compelling reasons to conduct further research into the roles of changing climate and volcanic activity on the documented changes in faunal composition at Liang Bua.

“Climate change, volcanism, and modern human arrival are all reasonable possible explanations (but not mutually exclusive) for this observed co-disappearance, but more research at Liang Bua and elsewhere on Flores is needed before any definitive statements are made about these events.

“Our data also suggest that Homo floresiensis and stegadon florensis insularis, along with giant marabou stork and vulture, were extinct by ∼50 ka ago.

“This extinction event was coincident with, or followed immediately by, the arrival of modern humans on Flores ∼46 ka ago, as suggested by a significant shift in stone artifact raw material preference.

“If our interpretation of this evidence is correct, then it marks the earliest cultural evidence of modern humans in Indonesia and among the oldest in all of Island Southeast Asia.

“Whether late-surviving groups of Homo floresiensis interacted with the earliest arrivals of Homo sapiens on Flores is an open question that future research may help answer.”

Homo floresiensis was first identified as a new species in 2003.

Controversy has raged ever since, with some scientists insisting that the differences in their anatomy could be attributed to pathology, and that they were in fact modern human beings after all.

However, it is now widely acknowledged that the fossils do represent a distinct species.

Extreme Drought in Italy Reveals Hidden Bomb Submerged in River Since WWII
New Predictions Reveal The Fate of The World’s Biggest Ice Sheet if We Don’t Act : ScienceAlert
An Experimental Surgical Robot Is Headed to The International Space Station
A Common ‘Forever Chemical’ Has Just Been Linked to Liver Cancer in Humans : ScienceAlert
Minor Google Meltdown Exposes The World’s Utter Reliance on a Single Tech Company