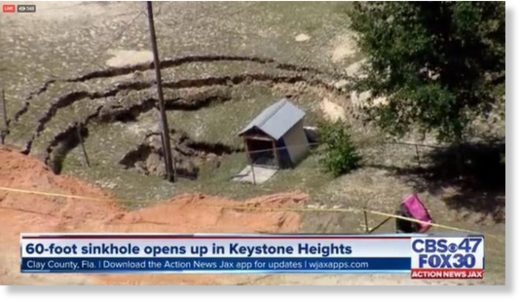 
What started as a small 3-foot-hole is now a whopping 60-foot wide crater, swallowing everything on its path!

Reasidents of Keystone Heights are terrified and believe the growing sinkhole could swallow up their cars or even their homes!

Sometimes, something harmless can grow into something nightmarish. This is exactly what’s happening in Keystone Heights, Clay County, Florida right now. A small insignificant hole in the ground has grown to a 60 feet sinkhole and threatens traffic and rersidents in the small town.

As reported by Action News Jax:

The massive hole is impacting traffic and homes in Keystone Heights.

Tabby Castro has been without running water for three days.

“I don’t care if you don’t fix the road, fix my pump,” explained Castro.

Ever since a sinkhole, measuring 60 feet across, opened near her home on Auburn Avenue in Keystone Heights she’s been dealing with this.

“We have to go and buy cases of water to drink and to shower and brush our teeth,” Castro said.

She says the nightmare began when her neighbors had a crew came out to install new underground pumps for a well in the front yard.

“Those poor people. They had a 3-year-old and had to leave,” said Castro.

Sky Action News Jax flew over the hole to give you this aerial view.

A Clay County public safety spokesperson told Action News Jax they believe the cause of it is human interference.

“When they first started digging it was a 3-foot hole then it expanded,” said Castro.

Clay County Sheriff’s Office posted a tweet Wednesday saying “As the sinkhole is expected to expand, the public is asked to avoid the area.”

A Clay County Public Safety spokesperson told Action News Jax before they can determine everything is safe, they need Clay Electric to remove the power pole in the hole.

But a Clay Electric spokesperson says the pole does not present any danger, so they have no plans to remove it.

While some neighbors worry the hole may creep closer to their homes Castro just wants her life to return to normal.

The name of the county says it all… The ground is full of clay… And clay is known to form huge sinkholes… especially in Florida!