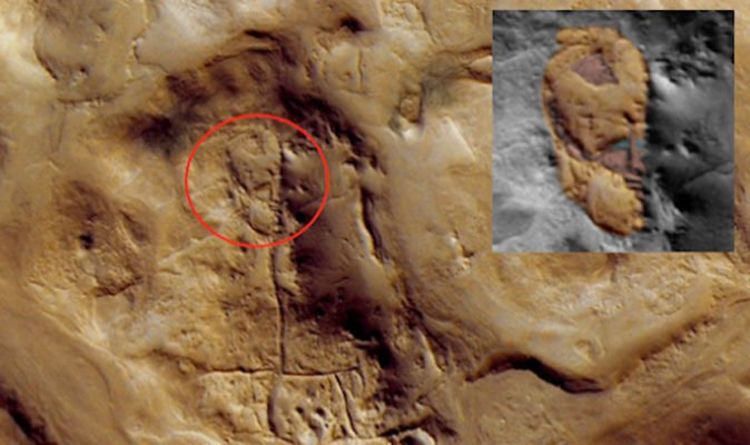 
The massive rock formation looks as if it depicts a carving of a man in a robe and high hat, and resembled the Mesopotamian art found in Iran and Iraq. The supposed drawing is a massive 3.4 kilometres long, meaning it would have taken a staggering amount of effort to carve into the reddish rocks of Mars. Along with the carving of what looks like a high-ranking male in religious robes appears to be a female, which conspiracy theorists say is the man’s wife.

The carving was spotted by prominent UFO hunter Scott C Waring who was using the Google Mars tool and he says it is proof an ALIEN species produced it.

“The face is part of a bigger drawing of two figures. You can see the line dividing the two figures which are wearing robes. You can also see a foot of the other person sticking out.

“The drawing was actually made from walls that stand very tall. These two figures look to be man and wife, and are raised higher than the surface around them, like a mound. It looks as if those walls are of an ancient city that once was there.

“For some unknown reason the second figures face and body has been covered up…as if to hide it from being seen. I think this may be a discrimination case between aliens where one species tried to cover up the other species art work.

“The art is also a message that this species lived here and these two leaders cannot be forgotten. But another species evidently felt differently and covered half of it up.”

However, sceptics and NASA would say the carving and other similar findings are just the effects of pareidolia – a psychological phenomenon when the brain tricks the eyes into seeing familiar objects or shapes in patterns or textures such as a rock surface.

This would mean that the Martian ‘carving’ could just be a misshapen rock.