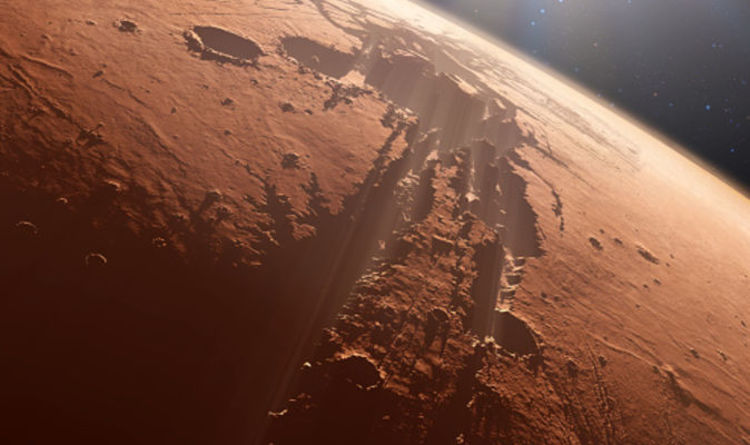 
Although the Earth will be sandwiched between the Red Planet and the Sun, Mars and the Earth will still be a mind-boggling 57.6million kilometres (35418157.9 miles) apart.

But it will be closest the two planets have been together for a decade-and-a-half and Earth and Mars will remain this close util October 2020.

The space spectacular, that will no doubt have stargazers mesmerised, only happens every 15-17 years.

Those lucky enough to witness the lunar eclipse through the murky grey clouds on July 27, might have also been fortunate enough to see the angry red glow of Mars in the sky too.

Despite the July 31 spectacular being hailed as a phenomenon by eager spectators, it is no where near as such when the same alignment happened in 2003.

That saw the Earth and Mars reach 56million kilometres apart, an anomaly that was last recorded a whopping 60,000 years ago and will not happen again until the year 2287.

The event happens because like all the other planets in the solar system, the Earth and Mars have oval-shaped orbits.

The perihelic opposition happens when Mars is at the nearest point to the Sun in its orbit, which was was triggered the lunar eclipse.

Doing the days that follow, Mars is also closest to the Earth.

This gives it its best visibility and for stargazers is a must-see because it will not be visible again until the year 2033.

The sight will be available to those in the Southern Hemisphere.

This means Britons will not be able to see it but countries such as Australia, Brazil, South Africa and New Zealand will.

A large telescope with a 6-8inch lens is recommended as clouds could obstruct a potentially perfect view.

The alignment will be seen from sunset.

Narwhals Are So Weird, Scientists Used Chaos Theory to Explain Their Behavior : ScienceAlert
Deep Brain Simulation Could Alleviate OCD When Other Treatments Have Failed : ScienceAlert
Experts Estimate The Scale of The Nord Stream Pipelines Methane Leak : ScienceAlert
We Just Got Our Closest View of Europa in 20 Years, And We Can’t Stop Staring : ScienceAlert
Secret Clues in Tutankhamun’s Tomb Reignite The Idea That Nefertiti Is Hidden Nearby : ScienceAlert