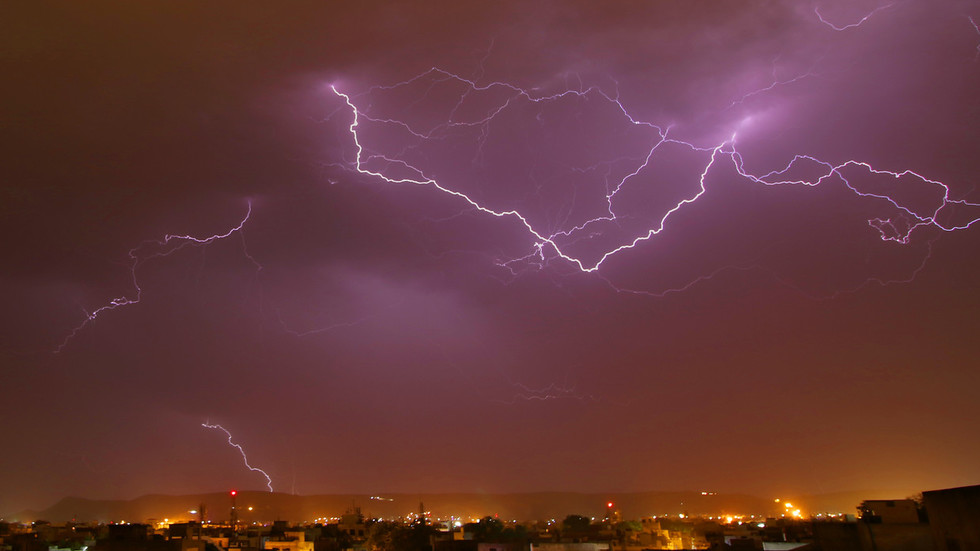 
At least 32 people were killed by lightning in the Indian state of Uttar Pradesh, India, Sunday, July 21, 2019.

Many more were also injured across the country as one of the strongest monsoon in decades has already killed 650 and affected millions of residents in South Asia.

Lightning claimed the lives of at least 37 people across 10 cities and districts in Uttar Pradesh in northern India on July 21, 2019.

The same day, at least 26 rural workers in the state of Rajasthan, also in northern India, were injured in a lightning strike that hit the state’s Pali district. The injured laborers were taken to a nearby hospital for treatment. 18 people were later released while eight female workers remain in hospital care.

It came two days after a lightning strike killed nine members of the socially marginalized Musahar community, including eight children, in the Bihar state bordering Nepal.

Also on Friday, eight children survived a lightning strike that hit a tree under which they were playing in Bihar’s Nawada district.

Lighting is very common in India, especially during monsoon season. A recent survey found it was responsible for 40 percent of all deaths from weather-related phenomena between 2001 and 2014.

In fact, lightning is the deadliest weather event in India, which claims over 2,500 lives every year.

Severe floods and lightning have claimed the lives of more than 650 people across India, Nepal, Bangladesh and Pakistan. More than 10 million people in the South Asian countries have been affected by the deluge, which has also forced tens of thousands to flee their homes.

Heavy rains since the start of July have killed at least 467 people with many districts in Uttar Pradesh, Bihar and Assam states cut off because of flooding.

Many cows have been killed too!

90 people have died and another 29 are missing, although the worst seems to be over in the Himalayan country.

Torrential rains in flood-prone Bangladesh have killed more than 97 people – most by drowning and lightning strikes – in the last two weeks, with swathes of agricultural fields lying inundated.

A third of the country is submerged as major rivers Brahmaputra and the Ganges burst their banks from heavy rains and from water from India and Nepal.

At least 30 people have also lost their lives in Pakistan.

Be ready for the next storm and don’t play with lightning! It will kill you!

Bacteria Can Use Plastic Waste as a Food Source, Which Isn’t as Good as It Sounds : ScienceAlert
Dozens in 7,000 Year Old Mass Grave Were Carefully Decapitated After Death : ScienceAlert
One Simple Idea Makes It Much Easier to Manage Your Weight Over Time : ScienceAlert
These 5 Traces of Ancient Ancestors Still Exist in Human Bodies Today : ScienceAlert
People Who Don’t Exist Look More Real Than Actual People, Study Finds : ScienceAlert