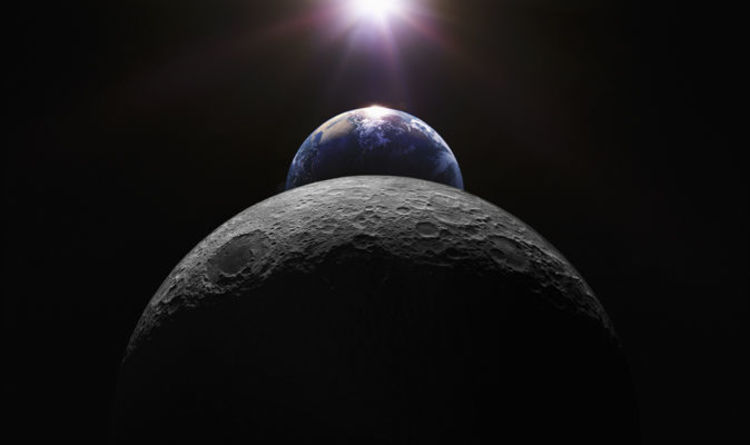 Now, there is more evidence to suggest that water covers almost the entire sub-surface of our lunar satellite.

Scientists at Tohoku University, Japan, have analysed a lunar meteorite – a rock which broke off from the Moon after a potential impact and travelled to Earhh.

The meteorite, which was discovered in a desert in northwest Africa, is made up of moganite – a mineral which requires water in order to form.

In 12 other meteorite samples which came from the Moon, there were none that contained moganite.

Researchers say this is proof the mineral formed on the Moon and not in space, or Earth.

Lead researcher Masahiro Kayama said: “Moganite is a crystal of silicon dioxide and is similar to quartz. It forms on Earth as a precipitate when alkaline water including SiO2 is evaporated under high pressure conditions.

“The existence of moganite strongly implies that there is water activity on the Moon.

“If terrestrial weathering had produced moganite in the lunar meteorite, there should be moganite present in all the samples that fell to Earth around the same time. But this was not the case.”

By analysing the rock, researchers have concluded the water in lunar soil is about 0.6 weight percent.

According to an article in Science Alert, this would be enough water for future explorers to extract “about 6 litres per cubic metre of lunar rock (1.6 gallons of water per 36 cubic feet),” and would be enough to sustain future colonies.

Dr Kayama said: “For the first time, we can prove that there is water ice in the lunar material.

“In a moganite, there is less water, because moganite forms from the evaporation of water. That’s the case on the surface of the Moon.

“But in the subsurface, much water remains as ice, because it’s protected from the sunlight.”

Do You Need to Drink Eight Glasses of Water a Day? It’s Complicated : ScienceAlert
Engineers Propose an Ambitious Plan to Bury Excess Carbon at The Bottom of The Ocean : ScienceAlert
A Strange Thing Happens to Wolves Infected by Infamous Mind-Altering Parasite : ScienceAlert
Mars Once Had So Much Water, It Could Have Been An Ocean World, Scientists Say : ScienceAlert
Mummies With Golden Tongues Discovered in Ancient Egyptian Necropolis : ScienceAlert