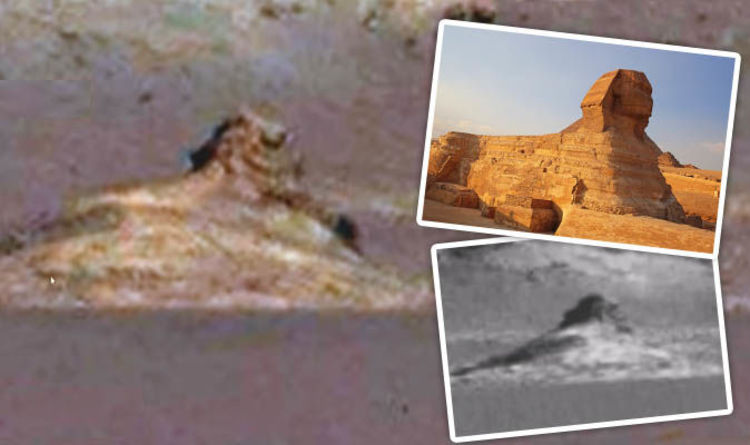 
Online UFO hunter and self-appointed space journalist Joe White claims to have stumbled upon the crumbling remains of a long-forgotten alien Sphinx statue on Mars.

Mr White presented his bizarre claim to the public after combing through hundreds of NASA photos taken by the space agency’s Curiosity Rover.

The bizarre rock formation in question at first glance appears to be reminiscent of an ancient Egyptian Sphinx statue, sparking fierce debate online.

Mr White shared the image online on his YouTube channel under the title “GIANT 200 ft SPHINX found on MARS”.

The UFO hunter wrote in the video description: “A close look at the five different viewing angles of the Mars giant Sphinx.

“Photographed over a number of years by the Curiosity Rover this Martian Sphinx statue that is over 200 feet long.

“Could it be the same size as the Egyptian Sphinx at Giza? It could well be.”

The Great Sphinx of Giza is the second most recognisable symbol of ancient Egypt, after the Pyramids, and is believed to date back to the reign of Pharaoh Khafre between 2558 and 2532 BC.

The Sphinx is a mythical creature part man part lion and stands on the west bank of the Nile on Giza Plateau.

Mr White has now claimed he found its extraterrestrial twin on the dusty surface of the Red Planet.

He said: “Is this irrefutable evidence of a civilisation on Mars in the past that we have been looking for?

“It looks like a Sphinx from the front, back and side in multiple images. What more could you ask for?

“The carefully cross-referenced photos in this video presentation show this beyond any reasonable doubt.

“Anyone who says otherwise probably has an agenda and is not acting in our best interests.”

The UFO hunter’s video has already racked up more than 3,000 hits on YouTube and many of the viewers were seemingly convinced by the NASA photographs.

Grant Tracy wrote in a comment: “Like the Thunderbird opening! I used to watch that show in the states every week.

“Great photo analysis. Looks like plenty of NASA sand all around the object.”

Donnie Blair said: “How in the hell can you say that is just a rock or pareidolia? That looks like a head of a statue.

“Look how NASA fudge the picture all around the statue and on the statue but they hardly touched the head it looks like. Like they did that on purpose.”

However not everyone was conceived the oddly shaped rock formation is anything more than just some dusty rocks.

Mark Harrison commented: “I’m all down for there being possible artefacts of a potential civilisation having lived on Mars but the Sphinx to me looks more like Jabba the Hut.”

Many viewers also suggested the “Sphinx” is a classic example of the psychological mind trick known as pareidolia.

UF hunters who fall prey to pareidolia often see shapes and patterns on Mars and other planets where they do not exist.

Cosmologist Carl Sagan speculated in 1995 pareidolia was an evolutionary trick developed by early humans to recognise foes from friends.

A Tobacco Plant Has Been Engineered to Produce Cocaine in Its Leaves : ScienceAlert
Mummies With Golden Tongues Discovered in Ancient Egyptian Necropolis : ScienceAlert
The Science Behind Why You Sprain Your Ankle So Often, And What You Can Do About It : ScienceAlert
These Mysterious Fungi Belong to an Entirely New Branch on The Tree of Life : ScienceAlert
Chilling Glimpse Into Our Future if We Survive Another Million Years : ScienceAlert