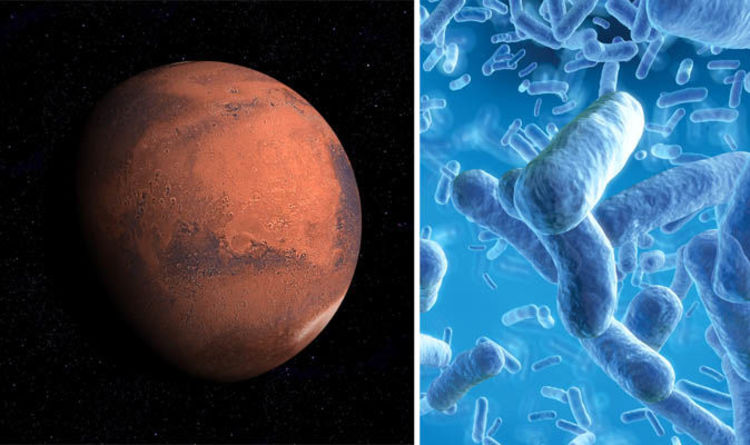 
The hunt for extraterrestrial life could be nearing its end thanks to a team of scientists at Purdue University, Indiana, US.

The presence of ice coupled with intense volcanic eruptions could have created a “little happy place” for minuscule alien organisms to thrive.

Assistant professor Briony Horgan, from Purdue University, said: “Even if Mars was a cold and icy wasteland, these volcanic eruptions interacting with ice sheets could have created a little happy place for microbes to exist.

“This is the kind of place you’d want to go to understand how life would’ve survived on Mars during that time.”

Professor Horgan and her colleagues looked at climate patterns on Earth to establish what the surface of Mars may have looked like in the distant past.

Landscape observations have led scientists to believe Mars was abundant with free flowing lakes and rivers around four billion years ago.

But recent climate models suggest the planet was not warm enough for liquid water to pool on the surface.

Instead, Professor Horgan looked at the planet’s volcanic record to figure out whether liquid water existed on Mars or not.

The space expert said: “There are people trying to model Mars’ ancient climate using the same kind of models we use here on Earth, and they’re having a really hard time doing it.

“It’s difficult to create a warm ancient Mars because the sun was a lot fainter then. The whole solar system was cooler.

“While a lot of people are using climate models, we’re coming at this from a unique perspective – what does the volcanic record of Mars tell us?”

Mars claims a very abundant volcanic history and is home to the largest known volcano in the entirety of the solar system, Olympus Mons.

The south of the planet is home to the Sisyphi Montes mountain range of more than 100 flat-top mounds believed to be volcanic in origin.

Such flat-topped mountains are formed on Earth when volcanoes erupt underneath glaciers and thick ice sheets.

Purdue PhD candidate Sheridan Ackiss used a novel scanning method to establish whether the mineral composition of these mountains fits the bill of sub-glacial volcanoes.

She said: “Each rock has a specific fingerprint, and you can identify that with reflections of light.

“We now have two sets of data, minerals and morphology, that say there had to have been ice on Mars at some point in time.

“And it was probably relatively late in Mars’ history.”

The study’s findings were published in volume 311 of the science journal Icarus.