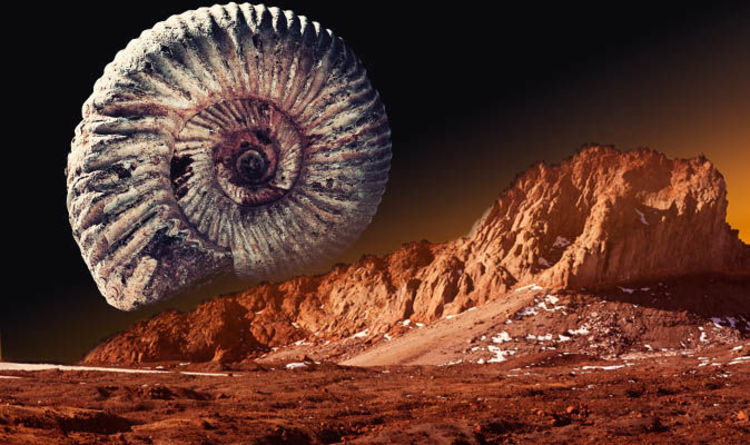 
The researchers believe these rocks, which formed in Mars’ dried up lake beds, could contain alien fossils dating as far back as four billion years ago.

The incredible claim was presented this week in a study at the University of Edinburgh and published in the Journal of Geophysical Research.

He said: “There are many interesting rock and mineral outcrops on Mars where we would like to search for fossils, but since we can’t send rovers to all of them we have tried to prioritise the most promising deposits based on the best available information.”

The findings could now aid NASA in its never-ending search for traces of life on Mars.

The US space agency will attempt to recover rock samples from the Red Planet during its upcoming 2020 mission to Mars.

And the scientists behind the new study determined the lake bed rocks could contain preserved fossils because of their unique composition.

The rocks, made out of compacted clay or mud, are rich in iron and silica which helps preserve fossils intact.

If the study’s assumptions are correct, these rocks could contain traces and fossils of ancient alien microbes.

The Martian rocks are also much better preserved than their counterparts on Earth, the researchers underlined.

The rocks most likely formed during the Noachian and Hesperian Periods of Martian history some three to four billion years ago.

Mars is believed to have been abundant in water during this period before the planet lost its magnetic field and most of its atmosphere evaporated.

An abundance of liquid water could have been a key element towards the planet sustain living organisms.

The lake bed rocks were then perfectly preserved over the years because the surface of Mars is not subject to plate tectonics like Earth.

If NASA’s space boffin take on board the study’s findings they could send their 2020 rovers to collect the crucial samples from the lake beds.

The rock samples will then be returned to Earth for further analysis.

How to Have a COVID-Safe Car Ride, According to Science
‘Brain Androgyny’ Is Surprisingly Common And May Boost Mental Health, Scientists Say
Scientists May Have Figured Out What These Weird Bronze Age Objects Really Represent
How Mutualistic Bonds Between Species Can Morph Into Evolutionary Battles
Spitting Cobra Venom Didn’t Evolve to Kill – Just to Put Us in a World of Pain