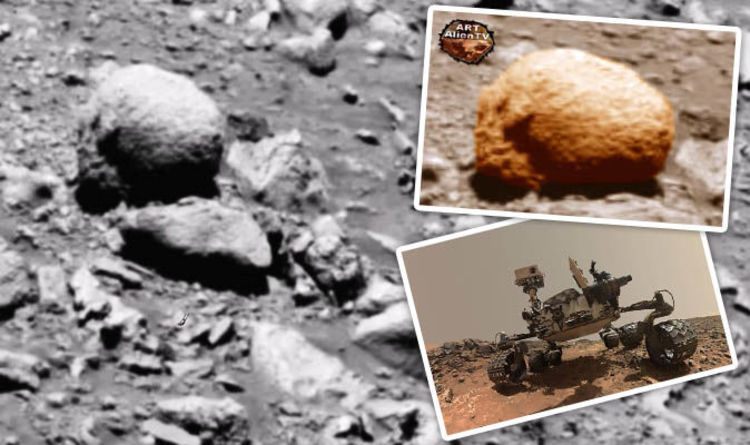 
NASA will lift the veil on its latest discovery on Thursday, June 7, after teasing the world with next to no information about its latest exciting finding.

Space enthusiasts from around the world have been invited to tune in online tomorrow at 2pm EDT or 7pm UK time.

And UFO hunter Joe White thinks he may have found clues of ancient life on Mars ahead of NASA’s big reveal.

The popular UFO enthusiast and self-titled space journalist believes he came across NASA pictures of what could be a long-forgotten alien crime scene.

He says in the video: “It is quite similar to the dead alien soldier which I found a few years back and posted on my channel.

“There’s probably 30 or 40 of these alien skulls now. This is one of the best examples.

“I find most of them but this is an example of one that’s been found by a different researcher and it is an amazing find.

“When you start looking at the images carefully you can see that there are other skulls and things in this immediate area. It’s a bit like a crime scene.”

The doubtful “alien fossil” pictures were taken by NASA’s Spirit Rover on Sol 648 – the 648th Martian day of its mission.

Much like the NASA’s famous Curiosity Rover, Spirit took a total of 128,224 photos which are freely available to see online.

Mr White said the photographs are irrefutable proof ancient aliens once roamed the Red Planet but asked the audiences to suspend their disbelief for a bit.

He said: “An open mind is required when viewing images from other planets. One day our very survival may depend on it.”

The dubious alien claims come after a space expert Dr Barry DiGregorio said NASA could be ready to announce evidence of microbial life on Mars tomorrow.

But what are the odds the NASA photos are anything more than just over-analysed pictures of oddly-shaped rock formations?

Mr White himself admits in his alien fossil videos the pictures could be a classic case of Pareidolia – a peculiar mind trick which makes people see shapes and patterns where they do not exist.

Cannabis For Pain Relief? Review of 20 Studies Provides Sobering Results : ScienceAlert
It Sounds Crazy, But Walking Backwards Is Really, Really Good For You : ScienceAlert
Astronomers See a Star’s Final Scream Into a Black Hole Halfway Across The Universe : ScienceAlert
Engineers Propose an Ambitious Plan to Bury Excess Carbon at The Bottom of The Ocean : ScienceAlert
Chilling Glimpse Into Our Future if We Survive Another Million Years : ScienceAlert