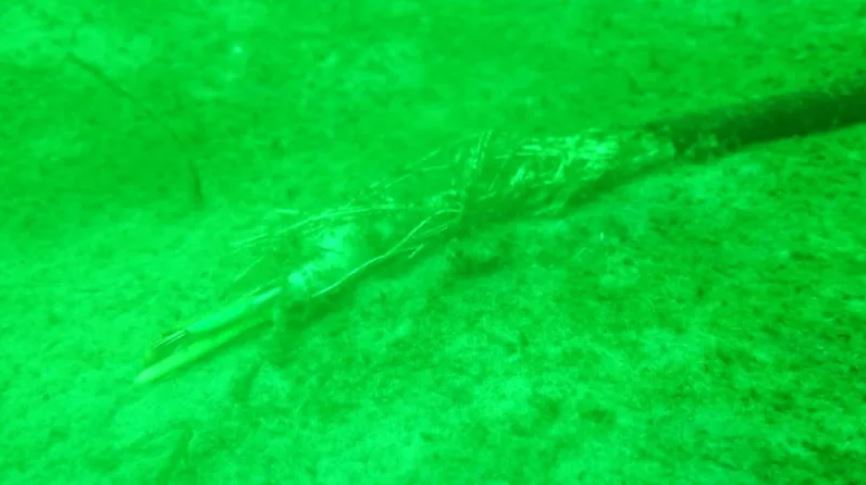 Divers were dispatched to the site, only to find that the entire structure was gone, with the exception of a shredded transmission cable.

On August 21 at 8:15 p.m. local time, transmissions from the €300,000 ($330,000) station came to a sudden halt. Divers were dispatched to the site, only to find — much to their astonishment — that the entire structure was gone, save for a shredded transmission cable, according to a GEOMAR statement.

“[At] first we thought of a transmission error,” Hermann Bange, project coordinator for the Boknis Eck Observatory, said in the GEOMAR statement. This prompted a diving mission to the site, revealing the disappearance. “The devices were gone, the divers could not find them anymore,” he said. “When the divers reached the bottom of the sea last week at the observatory’s location, they found only the torn off land cable. It was completely shredded.”

The missing observatory consists of two racks, one weighing 250 kilograms (550 pounds) and the other 100 kilograms (220 pounds) each. The racks include a frame holding the power supply (along with a heavy cable connecting the station to the coast) and a frame to hold the sensors. Both racks were “removed with great force from their position,” according to the GEOMAR statement.

The observatory was in a restricted area off the northern coast of Germany. Boats, including fishing vessels, are not allowed into the area, the BBC reported.

That somebody, or a group of individuals, removed the observatory remains the most plausible explanation. Other factors, such as a massive storm, heavy currents, or even marine animals, were ruled out as potential causes owing to the weight of the instrument.

Who or what removed the science station, and why, is a complete mystery. German police were alerted to the incident and are now investigating, according to GEOMAR.

The Boknis Eck Observatory is — or at least was — located at the outlet of Eckernförde Bay, which is north of Kiel, Germany and south of the Danish border. It was 1.8 kilometers (1.1 miles) off shore, planted at a depth of 22 meters (72 feet), reported the BBC.

The station collected data about water temperature, nutrients, salinity, the speed of water flow, and concentrations of chlorophyll and methane to evaluate the health of the ecosystem in and around the southwestern Baltic Sea.

By monitoring these changes, scientists can be alerted to potential problems and take the required countermeasures. Scientists have been collecting data in the bay since the 1950s. The observatory is also used in the COSYNA network (Coastal Observing System for Northern and Arctic Seas) of the HZG.

Bange described the data collected by the observatory as “downright priceless.” GEOMAR and HZA conducted their own search for the missing station, but with no luck. The scientists are now pleading for the public’s help, asking anyone who knows anything about the incident to come forward.

As explained by Gizmodo, the disappearance is reminiscent of sunken naval ships that are likewise vanishing from the ocean floor. In those cases, looters are suspected of tearing the ships apart for scrap. Perhaps something similar is happening here, though it’s not clear what value this monitoring station, equipped with an assortment of scientific instruments, might have for looters.

Or, it could be the result of a nefarious military operation conducted by an unknown state actor, but that’s pure speculation. Hopefully the mysterious disappearance will be resolved in the next days or weeks.