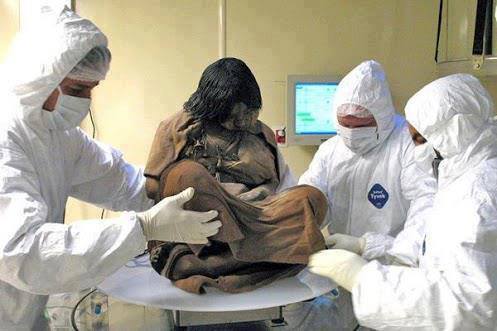 
Juanita La Doncella or The Maiden is the name of a mummy of a teenage Inca girl who was sacrified more than 500 years ago in the Andes Mountains.

The girl and two other children were left on a mountaintop to succumb to the cold as offerings to the gods. The cold, dry environment preserved La Doncella perfectly, making her look as if she just recently fell asleep.

The mummy is called La Doncella or The Maiden.

The teenage girl – approximately 11–15 years old – and two other children were left on Argentina’s Llullaillaco volcano (22,100 feet or 6,700 meters) to succomb to the cold as offerings to the gods sometimes between 1450 and 1480.

The excavation of the mummies at the mountain’s peak was the world’s highest archaeological dig.

The mummies of the other two children remain in storage for further study.

La Doncella was found dressed in a ceremonial tunic and adorned with a headpiece, tokens of her new status as a messenger to the heavens.

She may have been an aclla or “sun virgin,” chosen as a child to eventually become a sacrifice to the gods.

The girl had also drunk corn liquor, likely to put her to sleep and her mouth still held fragments of coca leaves, which the Inca chewed to lessen the effects of altitude sickness.

However no tattoos were found on her.

The researchers wrapped the frozen bodies in layers of plastic, snow, and foam insulation to keep them cold and maintain their exquisite preservation.

The 500-year-old mummies were taken to the city of Salta for study.

La Doncella is the best-preserved mummy ever found, with internal organs intact, blood still present in the heart and lungs, and skin and facial features mostly unscathed.

The Museum of High Altitude Archeology in Salta, Argentinia is displaying The Maiden in a refrigerated, low-oxygen environment to reproduce the high-altitude conditions that allowed for its remarkable, natural preservation.

Babies May Not Be Born With a Microbiome After All, Scientists Say : ScienceAlert
JWST Has Found Life’s Elemental Building Blocks in The Depths of Darkest Space : ScienceAlert
People Who Don’t Exist Look More Real Than Actual People, Study Finds : ScienceAlert
An Expert Explains Why The Radioactive Water Stored at Fukushima Should Be Released : ScienceAlert
Lightning Strikes Create a Strange Form of Crystal Rarely Seen in Nature : ScienceAlert