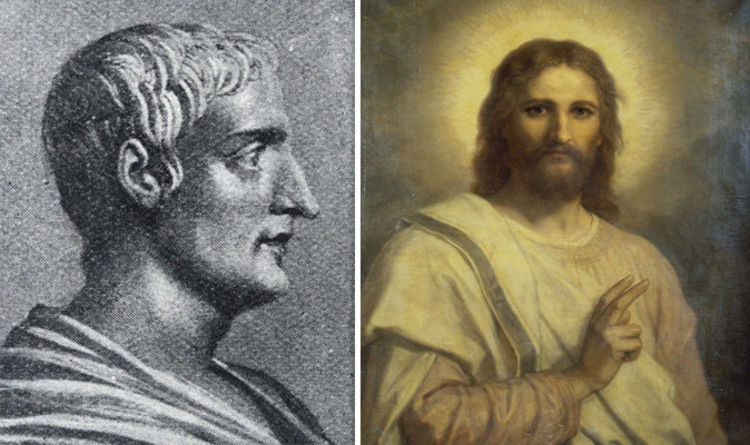 
Tacitus is regarded as one of the best historians of the Roman era, and was born in just 54 AD – Jesus would have been put to death until around 30-33 AD.

The historian mentions Jesus once in his Annals – a record of events year by year – when Nero, a Roman empire, pushes the blame of the Great Fire of Rome, which took place in 64 AD, onto a relatively new group called ‘Christians’.

In the Annals, which cover 14AD to 66AD, Tacitus then gives a bit of background on Christians and even Pontius Pilate, who had sentenced him to death.

Christ is referred to as Christus.

Tacitus writes: “Therefore, to scotch the rumour, Nero substituted as culprits, and punished with the utmost refinements of cruelty, a class of men, loathed for their vices, whom the crowd styled Christians.

“Christus, from whom the name had its origin, suffered the extreme penalty during the reign of Tiberius at the hands of one of our procurators, Pontius Pilatus, and a most mischievous superstition, thus checked for the moment, again broke out not only in Judea, the first source of the evil, but even in Rome, where all things hideous and shameful from every part of the world find their centre and become popular.

“Accordingly, an arrest was first made of all who pleaded guilty; then, upon their information, an immense multitude was convicted, not so much of the crime of firing the city, as of hatred against mankind.”

The account backs up other written proof that Jesus did exist.

The sole surviving account of first century Judea, the ‘War of the Jews’ by Josephus, a first-century Romano-Jewish scholar and historian, does mention Jesus specifically on several occasions, including one passage which reads: “At this time there was a wise man named Jesus. His conduct was good and [he] was known to be virtuous.

“And many people from among the Jews and the other nations became his disciples.

“Pilate condemned him to be crucified and to die. But those who became his disciples did not abandon his discipleship.”

This Species of Carnivorous Plant Evolved Into a Toilet And Is Now Winning at Life : ScienceAlert
Babies May Not Be Born With a Microbiome After All, Scientists Say : ScienceAlert
JWST Has Found Life’s Elemental Building Blocks in The Depths of Darkest Space : ScienceAlert
Hypertension Drug Shown to Extend Lifespan And Slow Aging in Animals : ScienceAlert
Our Body Temps Have Been Dropping For 160 Years. Gut Microbes May Be Playing a Role : ScienceAlert