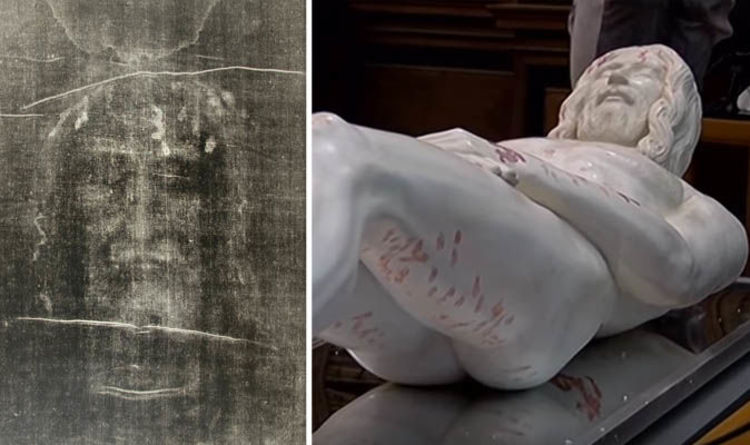 
Images of Jesus with a fair complexion, beard and long hair are based on 4th century Byzantine icons.

But there is little historical evidence to support his modern-day depictions.

Scientists from the University and Hospital of Padua examined the sacred Shroud of Turin, a linen cloth believed by many to hold a negative imprint of Jesus of Nazareth.

Professor Giulio Fanti who led the effort said the plaster reconstruction is an accurate image of what Jesus looked like “during his time on Earth”.

He said: “Our model is a three-dimensional representation of the actual dimensions of the Turin man, based on our accurate measurements of the traces left on the fabric int which the the body of Christ was wrapped after crucifixion.

“I am convinced we finally have a real image of what Jesus looked like on Earth.

“I think from now on it will be hard to depict him without referring to our work.”

Professor Fanti added Jesus was a man of “incredible beauty”, long limbs and measured around 5.9 feet in height.

The scientist claimed Jesus would have stood a whole 5.9 inches taller than his average contemporaries.

He added: “You could say, he had quite a regal, majestic presence.”

Professor Fanti’s study of the Turin Shroud further revealed hundreds of painful wounds along the front and back of the body.

The researchers counted as many 370 cuts, likely caused by flagellation, but suspect there could have been more.

However looking back at historic records of Judaea, the Romans and Greeks, there is evidence to suggest Jesus was not the long-haired, blue-eyed, Caucasian-looking man celebrated by Christians.

According to Professor Joan Taylor, King’s College London, Jesus most likely would have been shorthaired, had olive skin, a short beard and was draped in a short tunic.

These assumptions come from old Graeco-Roman depictions of what Moses looked like which is the closest historical resemblance to a prominent figure like Jesus.

In the Bible itself there is only one passage which refers to Jesus’ physical appearance.

The Letter to the Hebrews states: “It is clear that our Lord was descended from Judah.”

In her book “What did Jesus Look Like?” Dr Taylor also claimed Jesus came from a long labour-intensive background and this would have been reflected in his image.

She wrote: “Jesus was a man who was physical in terms of the labor that he came from.

“He shouldn’t be presented in any way as someone who was living a soft life, and sometimes that’s the kind of image we get.”

Do You Need to Drink Eight Glasses of Water a Day? It’s Complicated : ScienceAlert
The Science Behind Why You Sprain Your Ankle So Often, And What You Can Do About It : ScienceAlert
People in Portland Planted Trees. Decades Later, a Stunning Pattern Emerged : ScienceAlert
Mars Once Had So Much Water, It Could Have Been An Ocean World, Scientists Say : ScienceAlert
Octopus Brains Evolved to Share a Surprising Trait in With Our Brains : ScienceAlert