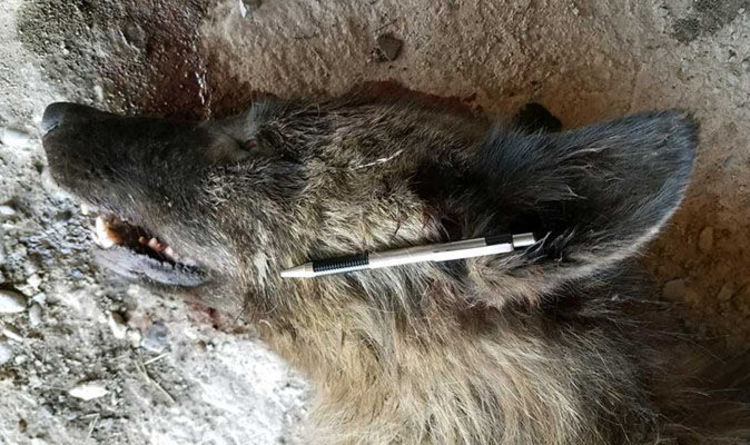 The animal, which was shot and killed just outside Denton, Montana after getting too close to the rancher’s sheep, had long greyish fur, a large head and an extended snout, much like a wolf, but its ears were too large, its legs and body too short, and its fur an unusual colour and texture.

Bruce Auchly, information manager for Montana Fish, Wildlife and Parks, said: “We have no idea what this was until we get a DNA report back.

“It was near a rancher’s place, it was shot, and our game wardens went to investigate. The whole animal was sent to our lab in Bozeman.

“That’s the last I ever heard of it.”

The news has fuelled frenzied speculation on social media about the identity of the mysterious creature.

One poster tweeted: “That could very well be what’s being called Dogman.

“They’re spotted each day and the government quells any and all reports.

“These are just facts. Look into if you don’t believe it.”

Another suggested: “Maybe a dire wolf. Because I don’t believe they are all gone.”

A third thought it looked like cryptid usually reported in Texas and Mexico, explaining: “It’s clearly a Chupacabra. Case closed.”

Other, less fanciful suggestions, were that it was a grizzly bear cub and a dog-wolf hybrid, the explanation favoured by Ty Smucker, wolf management specialist for Montana FWP.

He said: “Several things grabbed my attention when I saw the pictures

Mr Smucker said there had been several instances in recent years in which canid predators, neither all wolf nor all dog, had caused problems with ranchers in the region.

He added. “One was out somewhere in eastern central Montana killing sheep like crazy. Finally, we caught it and it turned out to be a hybrid.”

Unlike other hybrids, such as mules, which are the product of a dog and a horse, dog-wolf hybrids are fertile and can produce their own offspring.

Usually interbreeding is done in captivity, because although the species can interbreed in the wild, wolves are highly territorial and will usually kill an unfamiliar dog rather than allowing it to join their pack.

“A lot of those people don’t bother following regulations.

The body of the animal shot outside Denton has now been transported, examined and frozen. DNA testing results will probably take weeks to process.