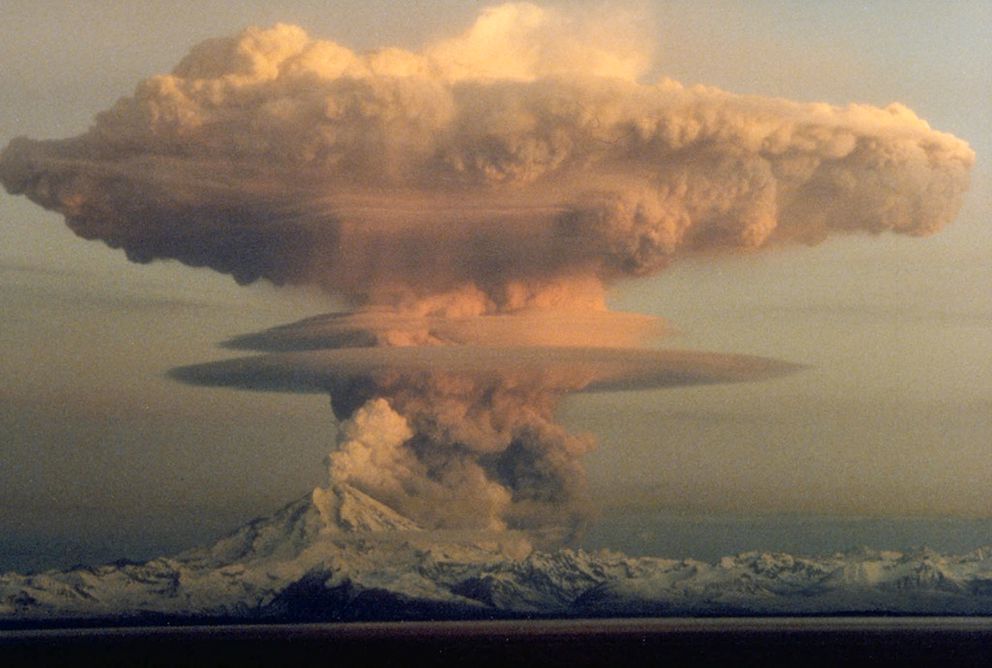 But the region around Alaska’s biggest city is hardly a stranger to volcanic eruptions and the mayhem they can cause.

Over the past 60 years alone, Anchorage and Southcentral Alaska has been repeatedly dusted by ash from erupting volcanoes located on the western side of Cook Inlet, shutting down airports and sending scared residents stocking up on air filters and face masks.

But what if one of Alaska’s 52 historically active volcanoes erupted on a truly major scale?

The Novarupta-Katmai eruption of 1912 has been declared the largest eruption of the twentieth century, devastating hundreds of miles of Alaska landscape, destroying habitations, disrupting telecommunications and dropping ash as far as Seattle.

According to USGS, already after the third day of eruption, “darkness and suffocating conditions caused by falling ash and sulfur dioxide gas immobilized the population of Kodiak.“

Even today, ash from the eruption lifted by strong winds can cause flights to be diverted.

So what about today

If an eruption on that scale happened today, vast ash clouds could blanket large swaths of Alaska with acidic, finely pulverized rock dust, causing serious problems for transportation, infrastructure, health and commerce. At the high end, a half-foot of ash could coat every surface.

Buildings could collapse under the weight of heavy ash. When ash gets wet, it turns to the consistency of concrete.

If Anchorage was walloped by an ash cloud, the biggest immediate impact could be on aviation — and commerce. Because ash can destroy a jet engine, planes flying would be diverted and flights to and from the city would be cancelled.

The Ted Stevens Anchorage International Airport would shut down until it could clean up ash from its runways.

When ash fell in 2009 the airport covered it with snow and used a snowplow to clear it. The airport has special “vacuum sweeper trucks” capable of sucking up ash that could be used in summer, she said.

Shipping could be impacted too. Coarse particles of ash that falls on water can form “pumice rafts,” of floating, air-pocketed rafts of rock that could litter Cook Inlet. The pumice rafts could stay intact, move around and cause problems for boats and ships.

Southcentral Alaska has oil and gas infrastructure at the base of an active volcano, though not for long.

When Mount Redoubt erupted in 2009, lahars, or volcanic mudflows, caused major flooding at the Drift River Oil Terminal, where crude oil is stored. The location of the terminal — at the foot of Redoubt — has long been criticized for its vulnerability to eruptions.

If ash blankets the city, expect the power to go out for at least a little while. Power companies would want to shield their machinery from the fine dust.

Chugach Electric’s Beluga power plant, across Cook Inlet, could be vulnerable and would shut down any generation plants in the path of a volcanic eruption and use other sources of generation, said spokeswoman Julie Hasquet.

Communications equipment could be disrupted. GCI says its operations centers are designed to be sealed to prevent “external airflow that could damage our systems. During other volcanic episodes, communities have experienced power outages and during those events we have relied upon backup generators,” said spokeswoman Heather Handyside.

Anchorage’s drinking water, which primarily comes from the glacier-fed Eklutna Lake, would be largely unaffected by a big ash cloud, since the filtering system that makes the lake water drinkable is already designed to remove “inorganic particulate matter” from glaciers, said Brett Jokela, the general manager of the Anchorage Water and Wastewater Utility.

If for some reason the ash overwhelmed the water treatment system plant, the city could also pull drinking water from a supply of 14 wells and a supply from Ship Creek, he said.

The next big eruption

Anchorage has been covered by a thick layer of ash before. Dig three or four feet deep and you’ll hit layer of ash two or three centimeters thick. Researchers believe it comes from an eruption of Mount Hayes about 3,500 to 3,700 years ago.

Thinking in geologic time, one of Alaska’s volcanoes will eventually go off in a big way. It’s not a question of if. It’s when.

The good news is there would probably be lots of warning beforehand as the Alaska Volcano Observatory monitor volcanoes around the state with sensitive equipment that can detect seismic rumblings that are a prelude to an eruption.

Alaska’s recent eruptive history is a lesson in how much just a little bit of ash, millimeters, can disrupt life. Now imagine what a half-foot might do.

How a Dead Girl in Paris Wound Up With The Most-Kissed Lips in All of History : ScienceAlert
New Prototype Device Generates Hydrogen From Untreated Seawater : ScienceAlert
Wildfire Destruction in The Western US Has Doubled in Just 10 Years : ScienceAlert
More Life Than We Ever Realized Could Survive in The Deep Dark of The Ocean : ScienceAlert
A Billion-Dollar Biotech Company Plans to Bring The Dodo Back to Life : ScienceAlert